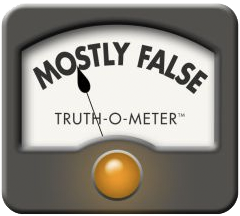 As fears over Ebola reached a crescendo, Rep. Cory Gardner, R-Colo., took a shot at the federal government’s handling of the disease during a debate with Democratic Sen. Mark Udall.

Gardner has been gaining ground in the closely watched Colorado Senate race, and that contest is just one of many around the country in which Ebola has become an issue.

Gardner, referring to the Centers for Disease Control and Prevention, said, "Perhaps the CDC should quit spending money on things like jazzercise, urban gardening and massage therapy and direct that money to where it's appropriate in protecting the health of the American people."

We wondered if it was true that the government is spending money on jazzercise, urban gardening and the like at the expense of funding for Ebola…

And yes, dear reader, the idea that the Centers for Disease Control is blowing its Ebola budget on "Jazzercise" is as ridiculous as it sounds. The funds in question pay for a whole lot of things the public values–including prevention of hospital-acquired infections.

Does Gardner’s focus accurately describe what the fund does?

[E]ven within the $300 million-plus spent on items such as preventing obesity, diabetes, heart disease, stroke and cancer, experts are certain that items such as jazzercise represent a tiny fraction of what CDC is spending.

The plan’s critics have chosen the silliest-sounding items — an effective rhetorical tactic, but not a very honest one…

[A]s it happens, there’s really no need to switch money out of the fund, since the fund can be used directly to pay for Ebola expenses. [Pols emphasis] Remember that $12 million we noted above that’s targeted for "infection prevention in health care facilities" for 2014? That’s relevant because, "right now in the United States, Ebola is exclusively a hospital-acquired infection," Mays said.

Gardner said the CDC is "spending money on things like jazzercise, urban gardening and massage therapy" that could be redirected Ebola.

We weren’t able to document such expenditures, but given the agency’s spending parameters, it’s certainly possible they’ve been made. However, by cherry-picking three chuckle- (or outrage-) inducing spending items, Gardner presents a misleading description of what the fund does. Those efforts almost certainly represent a tiny fraction of spending from the prevention fund, which is dominated by efforts to attack diseases that kill more than 1.4 million people every year…

The only thing we have to add is that it's objectively not cool, or at least it shouldn't be cool, to mislead people about the government's response to the Ebola outbreak. The CDC funding a couple of insignificant–and cast in a more truthful light, perfectly reasonable–health programs does not render the agency less able to respond to public health threats like Ebola. It's one thing to invoke these kinds of "$500 toilet seat" myths and misleading anecdotes in the abstract. To make these bogus claims in the midst of a public health crisis that is genuinely scaring people in order to win an election is, in our view, deplorable. It's the sort of thing that the Denver Post editorial board used to condemn, not endorse.