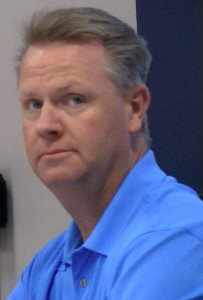 Jeffco Superintendent Dan McMinimee has turned to the “threaten teachers” section of his right-wing handbook.

UPDATE: We'll have more on this before tomorrow's Gubernatorial debate at the Denver Post auditorium, but in the meantime, here's an interesting take from Westword: (we had a feeling this would happen):

Meanwhile, the proposed history curriculum changes could become an issue in the upcoming gubernatorial race between Democrat office-holder John Hickenlooper and Republican challenger Bob Beauprez. At a debate Friday, the Durango Herald reports that Beauprez backed board members: "An elected school board not only has the right to speak up about curriculum and what they think are the wisest choices…but they have an obligation to do that," he said. Hickenlooper, for his part, was more critical, arguing that "you want your kids to learn about Dr. Martin Luther King, but you also want them to learn about the Boston Tea Party."

Classes were cancelled today at Golden and Jefferson High Schools in Jefferson County when a majority of teachers called in sick as part of an ongoing protest against heavy-handed tactics from the right-wing majority school board. As Jesse Paul of the Denver Post reports, Jeffco Superintendent Dan McMinimee is talking tough about cracking down on teacher protests…which is not going to go over well:

Teachers who missed school will have to show proof of illness, he said, adding that personal days need 24-hours notice.

"We are going to have our building principals work with each teacher involved in this," he said.

"We will probably dock them a day's pay," McMinimee said of teachers who didn't follow the guidelines of the collective bargaining agreement. "I think it's time for this to end. Let's put an end to this." [Pols emphasis]

That tone-deaf statement from McMinimee is fairly typical of the response we have seen from the conservative members of the Jeffco School Board — Ken Witt, Julie Williams, and John Newkirk have been oddly surprised that students, parents, and teachers are not excited about the idea of non-educators making massive curriculum changes. Even though Jefferson and Golden High Schools were closed today, that didn't stop students from another day of protests. McMinimee and the school board might want to pay closer attention to what the students are saying:

Angelica Dole, a sophomore at Jefferson High School, said the students were 100 percent behind their teachers.

"This is our own time. This was all students. No teachers are here, look around," Dole said.

At the same time that administrators are talking tough, the students are taking matters into their own hands, which further complicates any response. McMinimee and the school board have made passing references in the last week essentially laying the blame for protests with the JCEA (the Jeffco teachers' union), and they are getting more aggressive with those accusations and in trying to crack the whip with teachers. But the students can make things much, much more problematic:

The recent walk and sick-outs have raised alarm as the Oct. 1 state county day approaches, which determines district funding by enrolled and present students.

State officials said Monday that absences should not affect the district's funding — which is $7,021 per student — because of extensions and rules in the count which allow for students present five days before and five days after Oct. 1 to be included in the funding determination.

We're now entering the third week of high-profile protests in response to asinine actions from the right-wing Jeffco School Board. In that time, we've learned one thing above all others: Julie Williams and the rest of the conservative board appear to be completely clueless as to how to deal with this situation…which they, of course, created with their own actions. Check out this quote from Board President Ken Witt:

"I'm very disappointed that some of our instructors have chose not to turn up for work today. It is not appropriate for adult matters to impact the education of our students." [Pols emphasis]

Yes, really. That's Ken Witt saying it is not appropriate for "adult matters" to impact the education of our students. When you say, "adult matters," Ken, do you include when "adults" make inappropriate school curriculum plans based on partisan political positioning? Or does this only apply to "other" adults?