BREAKING: Cory Gardner Has His Own Ken Buck/”Meet the Press” Moment

UPDATE #2: Watch Cory Gardner's complete refusal to back up dubious claims about his "cancelled" insurance policy: 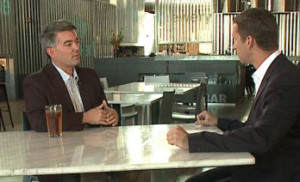 In mid-October 2010, Democratic Sen. Michael Bennet and Republican challenger Ken Buck had a nationally-televised Sunday "debate" on "Meet the Press" — an appearance that proved disastrous for Buck's campaign.

Did history just repeat itself?

Republican Senate candidate Cory Gardner appeared Sunday morning on Fox 31's #COPolitics interview show with Eli Stokols, and while he wasn't quite as awful as Buck on that fateful day in 2010…Gardner was bad enough that he may have just mortally wounded his campaign. We'll update this post with a link to the interview as soon as the video is available online, but here's what everyone will be talking about this week (and beyond):

Gardner was asked repeatedly by Stokols to clarify his story surrounding his family's health care coverage (a story sparked by Gardner waving his family's insurance letter at a hearing in front of then-Secretary of Health and Human Services Secretary Kathleen Sebelius) and refused to provide details even after several questions from Stokols. Gardner has faced questions before about his pre-Obamacare health care coverage, but in front of Stokols he squirmed, dodged, and tried to attack Sen. Mark Udall whenever he was asked for more information. Stokols noted that Fox 31 asked earlier this summer for copies of Gardner's pay-stubs to prove the Congressman's claims that he had no other health insurance other than his mystery $650-per month family health coverage; when pressed about why his office would not provide that information, Gardner went back to attacking Udall.

It would have been difficult for Gardner to have looked less believable in his responses. We'd guess there will be more than one reporter who starts taking a new look at Gardner's insurance claims after this debacle.

The entire interview is really a doozy. Stokols, to his credit, tries very hard to get clear answers to straightforward questions, while Gardner tries very hard to do anything other than answer those questions; to anyone watching, it is very clear what is happening. Clips of this interview will no doubt be looped repeatedly from now until November.