The Hubris of Julie Williams

UPDATE: The College Board weighs in strongly in support of students protesting against the Jefferson County school board's proposed "censorship" of the AP history framework, via 9NEWS:

"The College Board's Advanced Placement Program® supports the actions taken by students in Jefferson County, Colorado to protest a school board member's request to censor aspects of the AP U.S. History course," The College Board said in a statement.

The statement cites concerns with a portion of the proposal submitted by Jeffco School Board Member Julie Williams which reads "Materials should not encourage or condone civil disorder, social strife or disregard of the law."

The College Board states, "These students recognize that the social order can – and sometimes must – be disrupted in the pursuit of liberty and justice. Civil disorder and social strife are at the patriotic heart of American history – from the Boston Tea Party to the American Revolution to the Civil Rights Movement. And these events and ideas are essential within the study of a college-level, AP U.S. History course." [Pols emphasis]

We have a theory who the kids are going to listen to–and it's not Julie Williams. 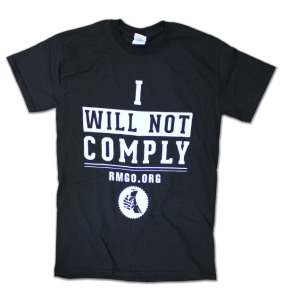 Yesterday, FOX 31 caught up with Jefferson County Board of Education member Julie Williams–the member of the new hard-right conservative majority school board responsible for a proposal to "review" new AP history curriculum standards, in hope of ensuring they do not "encourage or condone civil disorder, social strife or disregard of the law," and "present positive aspects of the United States and its heritage" while promoting "citizenship, patriotism, essentials and benefits of the free enterprise system." Her proposal has resulted in massive student protests all week in Jefferson County, as thousands of students walked out of class and took to the streets to demand that history "not be a mystery."

Williams has been difficult to reach by the press in the last few days as protests over her proposal raged, so FOX 31's interview was a big chance for her to set the record straight.

Or to make things much, much worse for herself, which is what happened.

FOX31 Denver’s Kent Erdahl spoke with Julie Williams Thursday night, the board member who is at the center of this controversy. The goal was to find out what she has in mind and what her reaction is to the protests which have been taking place for a week now…

Many say the fear comes from Williams` original criteria for her proposed committee which states … “Materials should present positive aspects of the United States,”  “Promote patriotism” and “should not encourage or condone civil disorder, social strife or disregard of the law.”

“Basically, what I am asking for is for history to be taught complete, without bias. So the good, the bad, the ugly without bias,” Williams says.

Kent Erdahl asked her, “Isn`t discouraging things like civil disobedience bias?” Williams answer, “I`m not talking about changing the history to not teach that. I`m saying we shouldn`t be encouraging our kids to disobey the law and that`s what`s happening right now. [Pols emphasis] Our kids are being encouraged to walk out of the schools.”

As we've noted a few times while covering the antics of the new Jeffco school board majority, Julie Williams is a member of the Neville "political dynasty" of arch-conservative political activists and politicians, which is very well known both in Jefferson County and at the Colorado Capitol. Williams is the sister-in-law of former GOP state Sen. Tim Neville, once again a candidate for the Senate in District 16. Tim Neville's son is Joe Neville, chief lobbyist for the infamous Rocky Mountain Gun Owners. Joe Neville's RMGO this election season is supporting a number of RMGO-endorsed legislative candidates.

And you know, it's a funny thing: RMGO doesn't have much trouble with people breaking laws.

Remember when Sen. Greg Brophy (R-RMGO) said these words from the well of the Colorado Senate? Brophy was hailed as a champion of freedom by RMGO and the gun lobby after he announced he would not obey House Bill 1224, the magazine limit law enacted last year.

Now folks, we don't know about you, but we'd say Brophy's declaration of "civil disobedience" to Colorado's magazine limit law sounds an awful lot like "encouraging our kids to break the law," doesn't it? Do you think the RMGO's "I Will Not Comply" T-shirts (above right) might be "encouraging" people to break the law?

Does Julie Williams own one?

In a way, this sums up the whole problem with any politically biased "review" of history, to smooth over the unsightly parts and not "encourage disregard for the law." Any time you try to review/rewrite/sanitize/whatever you want to call it history–any time you treat history as something you can bend to the politics of the moment–it comes back to bite you, from the civil rights movement to…well, even Greg Brophy.

And yes, sanitizing civil rights history in the U.S. is far worse than making a hypocrite of Greg Brophy. Almost incomparably worse. But Brophy's and RMGO's open support for lawbreaking does one thing very well: it throws the hypocrisy of Julie Williams into sharp relief.