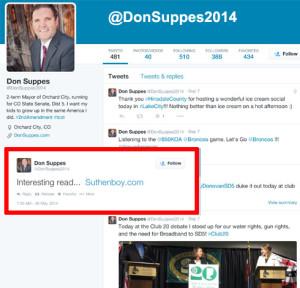 UPDATE: Suppes is changing up his excuse to the old "Rogue Staffer" problem. Remember, Suppes and his campaign previously blamed his Twitter problem on invisible "hackers," but now he has a different explanation in a follow-up to the Mother Jones article:

Sept. 23, 2014 at 3:30 pm: In an email to Mother Jones, Suppes confirms that his campaign reported unauthorized activity on the @DonSuppes2014 Twitter account. Suppes adds that he has taken steps recommended for victims of identity theft.

Suppes also notes that he did not manage his campaign's Twitter account. "The campaign Twitter account had been managed by a staffer who has since been terminated," Suppes writes. "No authorization was ever granted to comment on articles. I had never heard of Southernboy and only recently investigated the bizarre postings which were of great concern to me."

Suppes is running for SD-5 in the State Senate. How is it that he has multiple paid staffers doing anything for his campaign, let alone managing his Twitter accounts? Suppes doesn't mention anything about why his personal Twitter account, @DonSuppes, was deactivated. When this story first broke on Colorado Pols a few weeks ago, the initial response from team Suppes was to deactivate @DonSuppes, leaving @DonSuppes2014 online; eventually both accounts were deactivated.

A few weeks ago we told you about the Twitter accounts of Republican State Senate candidate Don Suppes, which have been deactivated after absurd claims from the Suppes campaign that his accounts had been "hacked." Well, that original screengrab we posted (image at right) has gone viral, with Mother Jones magazine picking up the story. It's not good for Suppes:

In a race that could decide which party controls the Colorado state senate, Republican state senate candidate Don Suppes is fending off accusations that his campaign tweeted out a link to a neo-Confederate website that denigrates gay people, women, and African-Americans, and complains that white people can't use the N-word.

Colorado Democrats are circulating this screenshot of the tweet, dated May 26, in which the Suppes campaign shares a link to the website SuthenBoy.com, with the words, "Interesting read…"

…Suppes is the two-term mayor of the 3,100-person town of Orchard City and runs a heating and cooling business. Democrats are also circulating a video of Suppes claiming that members of the US Senate were supporting UN plans to control parts of the United States. Suppes goes on to describe a plaque he saw on his vacation to Mexico bearing the number 21—the plaque is proof, he implies, that the UN has used "Agenda 21," a non-binding resolution that encourages sustainable growth, to encroach on sovereign nations; conservatives often describe Agenda 21 as a plan to evict US residents from rural communities and turn that land back into wilderness. "I do my homework," says Suppes. "If that makes me a conspiracy theorist, I'm sorry." [Pols emphasis]