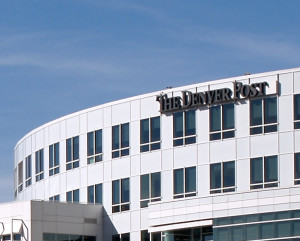 Fascinating speculation on the possible fate of the state's newspaper of record The Denver Post, via Aldo Svaldi:

Digital First Media's decision to pursue "strategic alternatives," including a possible sale, could result in The Denver Post, and 13 smaller newspapers in the state, operating under local ownership by early next year, media analysts predict…

Rick Edmonds, an analyst with The Poynter Institute, said wealthy investors have purchased the flagship newspapers in Washington, Boston, Minneapolis and Anchorage, Alaska, under what he calls the "Black Beauty" strategy.

"You might end up with a nice owner who gives you a warm stall," he said. "There are good odds that there might be someone in Denver and San Jose who would have that feeling."

The person most likely to fill that bill in Colorado is Philip Anschutz, whose holdings include The Oklahoman in Oklahoma City and The Gazette in Colorado Springs, predicts Mutter.

If that sends a shiver down your left-leaning spine, you may not be alone:

A bid by Anschutz, known for his conservative views, could potentially trigger a rival offer from millionaires on the other side of the political spectrum.

They include Internet entrepreneur turned Congressman Jared Polis, D-Boulder, and Tim Gill, who made his fortune in software publishing program Quark.

Svaldi reports that wealthy Rep. Jared Polis was "coy" when asked about the possibility of buying the Denver Post. We're not privy to any discussion about this one way or the other, although news of the Post going up for sale was not itself a surprise. It's no secret that the newspaper business has been in decline for many years, and digital revenues haven't replaced the old subscription model enough to keep them profitable. Meanwhile, competition from other media for long-format detailed coverage via online publishing has eaten away at the major newspaper's traditional role as the principal contemporary historical record.

That said, acquisition of institutions like our state's biggest newspaper for any ideological purpose, left or right, could reasonably be considered troubling to those who would like to simply get straight undoctored news. That may be as old a fear as William Randolph Hearst, and partisan Denver Post political news editor Chuck Plunkett may have rendered the question irrelevant for time being anyway–but that doesn't make it sit much better with us. We can say that the Colorado Springs Gazette, a major daily paper in Colorado owned by Anschutz, has a newsroom that in our experience unflinchingly covers bad stories Republicans like Gordon "Dr. Chaps" Klingenschmitt. The editorial board of the Gazette is conservative, but so is the market they serve.

One thing's for sure: we can't afford to buy the Post. Perhaps we'll buy a lottery ticket.