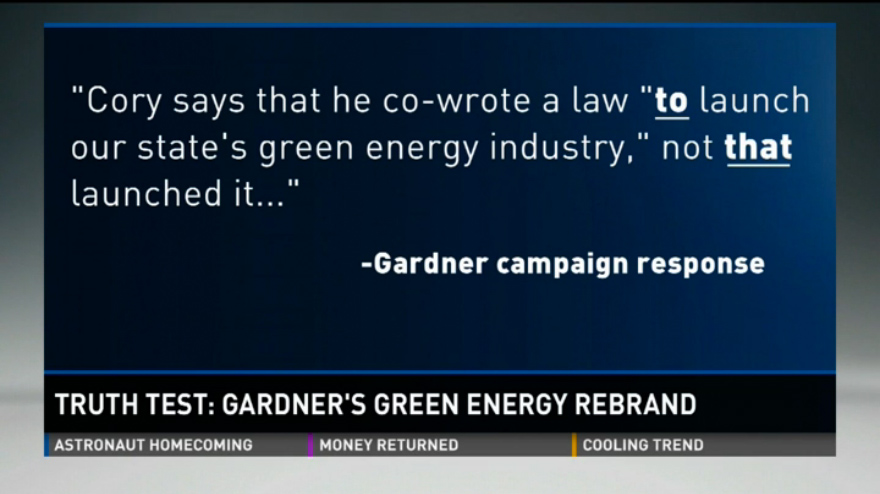 ​9NEWS political reporter Brandon Rittiman has done a commendable job this election season with a series of Truth Tests of political TV spots running in Colorado. We haven't always agreed 100% with Rittiman's analysis, but the simple act of looking at the claims made this year, like Americans For Prosperity's bogus Obamacare attack ads, has been invaluable for keeping the record at least somewhat straight. So many local newsrooms have simply abdicated the responsibility to fact check what they're told by politicians or see in political ads, that without a dedicated fact-checking segment like 9NEWS' Truth Test, lies simply go into the record uncorrected. And that's, we should all be able to agree, a bad thing.

Last night, Rittiman examined GOP U.S. Senate candidate Cory Gardner's new ad hyping a renewable energy bill Gardner co-sponsored in the Colorado legislature. As we discussed in detail last week, the legislation Gardner sponsored to "launch our state's green energy industry" in fact never funded a single project, and had no effect whatsoever on the development of Colorado's green energy industry. Credit for that goes to Colorado voters more than anyone for the passage of 2004's Amendment 37–which Gardner opposed.

That Gardner's ad was based on a fictional premise was well established by the AP's Kristen Wyatt before Rittiman Truth Tested it yesterday. But the answer Gardner's campaign gave when asked about the discrepancy…well, it could be one of the most embarrassing–and damning things–we've ever read.

It's true Gardner sponsored a 2007 bill in the state legislature that created a clean energy development authority.

The idea was for that group to help jumpstart projects for clean energy. It ended up actually doing—not a lot…

The report repeatedly blamed the law that Gardner is touting for its own lack of progress, citing "practical limitations bounded by the CEDA statute."

The Gardner campaign, of course, knows this. It provided 9NEWS the following explanation (emphasis not added.)

"Cory says that he co-wrote a law "to launch our state's green energy industry," not that launched it."

Folks, we honestly do not know if we have ever seen such a frank acknowledgment of purposeful deception from an American politician. This attempt to semantically defend an obviously misleading claim is more than preposterous; it betrays a contempt for truth on the part of Gardner's campaign that, even if you don't understand all of the facts here, is nothing short of breathtaking. We're pretty sure that Sen. Mark Udall's campaign couldn't have scripted a more self-incriminating answer.

What does it mean? Well, to our knowledge this ad is still running. There is no question the ad is meant to leave the impression that Gardner's useless, repealed legislation "launched our state's green energy industry."

We understand that there are partisan political considerations. But no one can defend this.