I cowrote the law to launch our state's green energy industry. 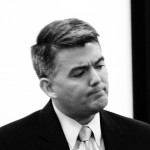 GOP Senate candidate Cory Gardner, framed by sunflowers and wind turbines, tells voters in a campaign ad this week that he co-wrote a law to launch Colorado's green-energy economy. He leaves out that the law was repealed five years later, deemed useless for not enabling a single project. [Pols emphasis]

"Gardner's claiming credit for launching Colorado's clean-energy economy and he did not. Coloradans did that and Coloradans deserve the credit," said Chris Harris, spokesman for incumbent Democratic Sen. Mark Udall. Udall's camp has been deriding Gardner's wind-turbine ad and the Republicans' touting of the 2007 law…

In a press release touting the turbine ad that first aired on Monday, Gardner's campaign cited a 2007 speech by then-Gov. Bill Ritter, a Democrat, who predicted the Gardner bill would "solve one of the biggest challenges when it comes to clean energy."

What we're talking about here is legislation sponsored by Gardner meant to create a "Clean Energy Development Authority" to provide money for clean energy-related upgrade projects. Wyatt makes specific reference to transmission line upgrades as one example. This legislation passed three years after Colorado passed Amendment 37, the state's landmark renewable energy standard law. And it's true that, at the time it was passed, Democrats and Republicans praised the legislation as you can read from then-Gov. Bill Ritter's press release above.

But unfortunately for Gardner, that's not the whole story:

But the authority had financing caveats that made it toothless, said Tom Plant, who oversaw the authority from its creation until 2011 as head of the Governor's Energy Office…

The authority never had a staff and did little but gather once a year to report to the legislature that it had made no progress. By 2012 the authority was scrapped, part of a larger makeover of the Energy Office, now called the Colorado Energy Office.

"There's no point in having something that can't do anything," said Plant, [Pols emphasis] now a policy adviser at the Center for the New-Energy Economy at Colorado State University. The center is run by Ritter, who set up the Governor's Energy Office and appointed Plant to run it.

Bottom line: in every meaningful way, it was Amendment 37 that "launched" Colorado's new energy economy. One of the foremost champions of Amendment 37 was none other than then-Rep., now Sen. Mark Udall. Cory Gardner opposed Amendment 37, as did most Republicans in 2004. Three years later, Gardner helped with a bipartisan bill to finance energy projects that ended up not working out.

The leap from these facts to Gardner's claim he "cowrote the law to launch our state's green energy industry" is, any way you look at it, totally absurd. It cannot be validated by even the most strained definitions. It is a lie every bit as blatant as Gardner's bogus distinction between state and federal Personhood, and it's another case of Gardner trying to "greenwash" his longstanding support for the oil and gas industry. And in a pattern we're seeing repeat itself, Gardner's spokesman Alex Siciliano only makes it worse when confronted with reality:

"In Washington, career politicians like Sen. Udall are fond of killing progress by faulting it for being imperfect. [Pols emphasis] That's one reason nothing gets done," spokesman Alex Siciliano wrote in a statement.

Because Obamacare actually did something.