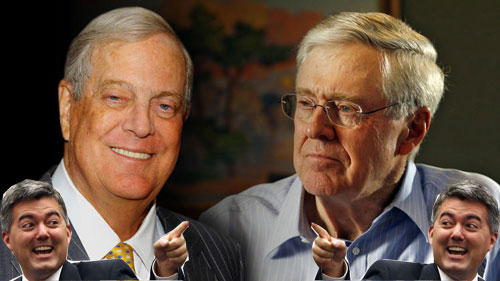 Cory Gardner is a big fan of David and Charles Koch…though he’d prefer to keep that quiet.

UPDATE: This story is being picked up everywhere, from Time magazine to NBC News and everywhere in between.

It's no secret that the billionaire Koch Brothers (David and Charles) are the proud parents of the Tea Party, Americans for Prosperity, and major contributors to all things Republican. It's also no secret that Democrats have been raising significant amounts of money using the Koch Brothers as Bogeymen, so Republican politicians have been careful about associating themselves too closely with the Koch family. A new audio recording has emerged in which Republican Senate candidates such as Cory Gardner heap praise on the Kochs during a super-secret conference in California this summer.

Iowa state Sen. Joni Ernst and Arkansas Rep. Tom Cotton directly credited donors present at the June 16 retreat in Dana Point, California, for propelling them forward. Colorado Rep. Cory Gardner told attendees that his race would likely be decided by the presence of "third party" money — an obvious pitch for generosity from the well-heeled crowd…

…Audio of the event, held at the St. Regis Monarch Beach resort, was obtained by The Undercurrent and shared exclusively with The Huffington Post. In it, the three Republican candidates, appearing on a panel titled "The Senate: A Window of Policy Opportunity for Principled Leaders," speak for several minutes each about the state of their respective races. Because the discussion took place in mid-June, some of the comments are dated. In addition, some of the audio was redacted to preserve the anonymity of the individual who provided it — "a source who was present at the event," per an official with The Undercurrent — and to remove sections with too much cross-talk. A separate source, who helped organize the retreat, confirmed each candidate's participation.

Getting exposed for loving up the Koch Brothers isn't a critical wound for Gardner, of course, but it will hurt his chances of beating Democratic Sen. Mark Udall in November–not to mention making hypocrites of anyone who brings up, for example, big Democratic funder Tom Steyer. As we've said over and over again in this space, Colorado voters have shown that they are more interested in supporting the statewide candidate who appears to be closest to the political center, and Gardner absolutely can't afford to appear any more partisan than he is already viewed. And while close ties to the Koch Brothers may not be a deciding factor for Unaffiliated voters, Gardner's cozy relationship with the coal barons will be incredibly helpful for Democrats as they try to motivate the base to get out the vote.