As the debate has continued over GOP Senate candidate Cory Gardner's abandonment of the Colorado "Personhood" abortion ban initiatives, the can of worms he opened attempted to put this issue to bed before election season has become increasingly evident. Instead of ending questions about his longstanding support for Personhood, which in addition to banning all abortion even in case of rape or incest could also outlaw certain forms of "abortifacient" birth control, Gardner's disavowal of the Colorado Personhood measure has led to a damaging and protracted look at the underlying details of the issue in the press.

In particular, Gardner's continued sponsorship of the federal Life at Conception Act, which contains the same essential language as the state Personhood measure granting a fetus rights "from the moment of fertilization," has opened Gardner to accusations of outright deception. If he still supports the federal equivalent of Personhood, plainly his claims to have "rethought" the matter are fictional–an attempt to, as Republican strategist Katy Aktinson cynically admitted, "muddy [the issue] up enough to take it away" from opponent Mark Udall. The much more straightforward reason, as Democrats alleged from the beginning, is that Gardner realized his support for Personhood is a fatal liability in his statewide U.S. Senate race.

In response to ongoing questions about this, Gardner campaign has told the press that there is a difference between the federal Life at Conception Act and the Colorado Personhood ballot measures:

"The federal proposal in question simply states that life begins at conception, as most pro-life Americans believe, with no change to contraception laws as Senator Udall falsely alleges," [Gardner spokesman Alex] Siciliano said. 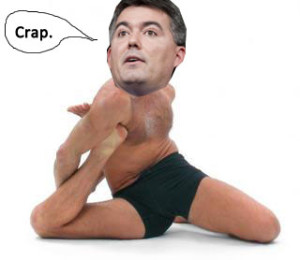 You'll recall that we and others immediately questioned this statement–the language in the federal Life at Conception Act and Colorado's Personhood intiatives that could outlaw so-called "abortifacient" birth control are in fact functionally identical, and there is nothing in the Life at Conception Act Gardner remains a sponsor of that prevents it from having the same effect. News stories at first accepted Team Gardner's statement at face value, but slowly we began to see in the reporting that journalists were aware of the discrepancy.

Gardner announced his change of position eight months after he had signed on as a co-sponsor to the federal “Life at Conception Act,” which would extend “equal protection for the right to life” under the 14th amendment to the “preborn” from the “moment of fertilization.” That language — giving the rights of a person to the fertilized egg — is exactly what raises the question of what such a measure would mean for some forms of birth control. Yet Gardner’s campaign told us he was not withdrawing his support for the federal legislation. Spokesman Alex Siciliano told us by email: “The federal proposal in question simply states that life begins at conception, as most pro-life Americans believe, with no change to contraception laws.”

We don’t see how the Colorado initiative and the federal bill, which supporters in Congress describe as a “personhood” measure, are different on this point. [Pols emphasis] And neither does one of the groups supporting the state initiative. Jennifer Mason, a spokeswoman for the Yes on Amendment 67 Campaign, which supports the ballot measure, told Colorado public radio station KUNC: “Obviously [Gardner’s] a victim of some bad political advice, there’s no reason for him to pull local support while he’s still 100 percent behind the federal amendment. It doesn’t make any sense.”

We agree. And we didn’t receive any further explanation from the Gardner campaign on the contradiction. We asked Nash at the Guttmacher Institute if there was something in the federal bill that would preclude the concerns over birth control, but Nash agreed that the “moment of fertilization” language was the reason these types of proposals had the potential to prohibit access to hormonal forms of birth control. [Pols emphasis]

In other words, exactly what we said all along.

It's not like this is a hard conclusion to reach: both Personhood and the Life and Conception Act are extremely short–a sentence or two at most in all their various iterations. Honestly, we have no idea what the Gardner campaign was thinking throwing out this nonexistent distinction. It was really easy to see that it's false. The elementary critical thinking required to see that Colorado's Personhood ballot measures are a threat to "abortifacient" birth control is no more difficult in the case of the Life at Conception Act.

Hopefully, this puts an end to the maddening up-to-now acceptance without question of Gardner's bogus defense we've seen from reporters either too busy or too lazy to rebut a plainly false statement. There's nothing unfair about checking to make sure the assertion you are reprinting is factually correct–or at least factually defensible. This bogus claim, very important to Gardner's credibility on a key issue, is neither.