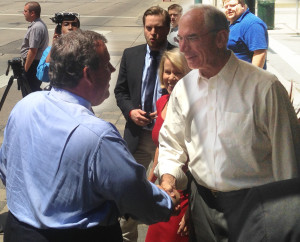 After embattled New Jersey Gov. Chris Christie's appearances in Denver last Wednesday, wherein he refused to back off from his previous contention that Colorado's "quality of life" stinks in the wake of marijuana legalization, Christie headed up to Aspen for a panel with other Republican governors at the Aspen Institute. While in Aspen, Christie has some fascinating things to say about the GOP's efforts to reach out to traditionally disaffected voters–women, minorities, young people. The Philadelphia Inquirer's Maddie Hanna reports:

Gov. Christie presented himself as both “pro-life” and a tolerant listener during a panel discussion with other Republican governors Thursday night, arguing that Republicans don’t need to avoid social issues to appeal to a broader range of voters.

The party hasn’t lost elections because of a focus on social issues, but because of its “tone and tenor,” Christie said at the Aspen Institute in Colorado. “I think we’re getting pounded because of the way we present ourselves.” [Pols emphasis]

Voters want people “who are authentic and believe what they say is true, but also are willing to be tolerant and listen to others’ points of view,” Christie said…

As a reminder, this is the same Chris Christie who hours before said in Denver:

Credit for the nickname "Both Ways Bob" is frequently given to Democrats, but the true origin of that nickname was Beauprez's 2006 gubernatorial primary opponent Marc Holtzman. Beauprez earned that nickname in the GOP primary over his tepid-at-best opposition to 2005's Referendum C "TABOR timeout" measure, and then kept earning it as he flip-flopped repeatedly on a wide variety of state issues he had at one time supported or opposed–the Referendum A "water grab," Jon Caldara's ill-considered Amendment 38, and Social Security privatization.

Since re-entering electoral politics this year, Beauprez has already joined U.S. Senate candidate Cory Gardner in flip-flopping on the Personhood abortion ban–as well as jilting backer Mitt Romney on the individual mandate to purchase health insurance. Beauprez, who once strongly endorsed the mandate as a conservative solution for health care reform, has both abandoned the idea of a nationwide mandate (which Romney supported before Barack Obama), and even a state-level mandate like Romneycare in Massachusetts.

As Democrats size up their case against Beauprez for the voters this year, the two principal message tracks are Beauprez's turn to rank extremism since 2006–the "civil war" and birther pandering being easy examples–and the longstanding "Both Ways Bob" theme of Beauprez being willing to change his stand on anything in order curry political favor. What Christie is basically saying is that the former doesn't matter as long as voters trust you.

To which we can only reply, "Both Ways Bob" isn't the man for that job.