“By calling on Attorney General Suthers not to appeal Judge Crabtree’s ruling striking down Colorado’s ban on marriage for same-sex couples, Governor Hickenlooper has shown incredible leadership as a champion for all Colorado families. From the moment he took office, the Governor has stood up for LGBT Coloradans and their families every step of the way: signing legislation to fight bullying and make our schools safer for LGBT youth, calling a special session on civil unions and ultimately signing the bill into law, and lending both his support and his signature to legislation that protects against workplace discrimination and provides tuition equity to undocumented Colorado students – including many LGBT young people. The record is clear.

“As a proud supporter of marriage equality, Governor Hickenlooper joins the 61% of Coloradans who believe that everyone should have the freedom to marry the person they love. With three Colorado counties now issuing marriage licenses to loving, committed couples who want to protect each other and their families, there is no doubt that our state’s discriminatory ban is hanging on by a thread. That thread is Attorney General Suthers, who is the only person left standing in the way of equality for our families. It’s time to move on. It’s time for Attorney General Suthers to stop wasting taxpayer money defending this indefensible ban, and it’s time for the freedom to marry for all Coloradans." 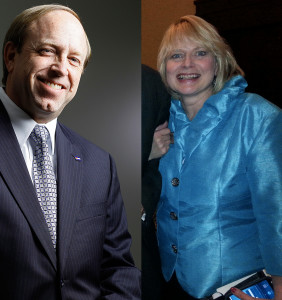 FOX 31's Eli Stokols caught up with a traveling Gov. John Hickenlooper late last night, and obtained by far the strongest statement yet urging GOP Attorney General John Suthers to give up the fight to preserve Colorado's ban on same-sex marriage:

Late Thursday evening, Hickenlooper, who is attending meetings of the National Governors Association in Nashville, told FOX31 Denver that he supports Crabtree’s decision and is urging Suthers not to appeal it any further than the Colorado Supreme Court.

“I remain a strong advocate for marriage equality,” Hickenlooper said. “The decision on marriage by Judge Crabtree puts Colorado on the right side of history.

“I have urged the attorney general not to appeal Judge Crabtree’s ruling. If he feels he needs to continue to defend this discriminatory law, I urge him to seek final resolution at the Colorado Supreme Court.” [Pols emphasis]

It was important for Hickenlooper to get out of the weeds of this issue and clearly take a stand. Now that he's done so, Suthers is in a much more difficult position politically–continuing to fight an unpopular wedge-issue battle against the wishes of the state's chief executive. The political damage this risks extends to Suthers' desired successor as AG, chief deputy Cynthia Coffman. Doing herself no favors, Coffman published an op-ed in the Colorado Springs Gazette today where she defends the state's continuing appeals:

Public debates can be contentious and polarizing.

Indeed, it is more difficult to defend laws in the eye of this public policy storm than it is to succumb to personal and political goals.

However, unlike my opponent in the race for attorney general, I do not confuse my policy preferences with my duty to defend laws with which I may disagree. When I chose to run for attorney general, I committed to set aside my opinions of what the law should be in favor of a higher legal system that recognizes the pivotal role of voters and the courts.

Efforts to change the law on same-sex marriage are now moving rapidly but are not yet settled, and until they are, the attorney general has a duty to play his part and defend current Colorado law.

Bottom line: there is a growing possibility that the Attorney General's race this year will have a much higher profile due to the fast-moving issue of same-sex marriage equality–an issue on which Democrats like AG candidate Don Quick took a risk by focusing on early in their campaigns, but now appear to have been brilliant politically as the issue makes headlines and public support increasingly becomes lopsided on the side of marriage equality.

It is an issue that Cynthia Coffman is now wholly on the wrong side of, along with her boss.