On Friday we discussed an odd bit of trivia related to Mike and Cynthia Coffman; while Congressman Mike can vote for Cynthia in the race for Attorney General, Cynthia cannot vote for Mike because she doesn't live in his Congressional District. The original story from Kurtis Lee of the Denver Post included an explanation (of sorts) from a spokesperson with Cynthia Coffman's campaign for AG:

“Cynthia and Mike owned their own homes before they were married,” said Sarah Lenti, a spokeswoman for the attorney general campaign. “Mike works in Washington, D.C., but for the weekends, and Cynthia lives and works in Denver as chief deputy attorney general.”

Lenti added that Cynthia Coffman lives in the home “closest to her work.”

We thought that this initial response to a seemingly minor story was oddly unemotional, since this is the kind of query that can often be deflected with a joke. But now we understand why they may have been more cautious. As a search of public voter records makes clear, Cynthia Coffman has indeed voted for Mike, registering to vote at his Aurora address in November 2007. What neither Coffman has explained, however, it why Cynthia changed her voter registration in March 2011 back to her home in Denver.

We've mapped out the changes in the graphic below. It certainly doesn't appear as though the Coffmans are doing anything illegal — though we see no reason why Cynthia would change her voter registration back and forth so often — but as we've said from the beginning of this story, the whole thing is just…weird. 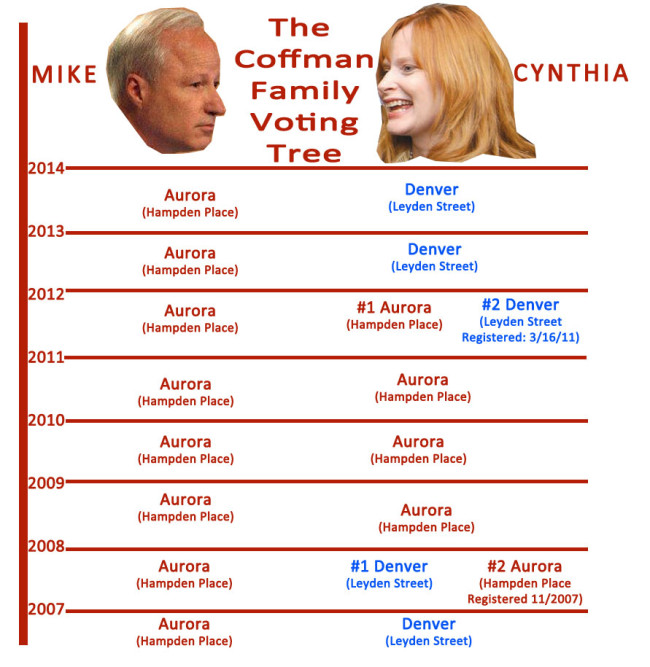 If you think this is confusing, you should have seen the pie chart.