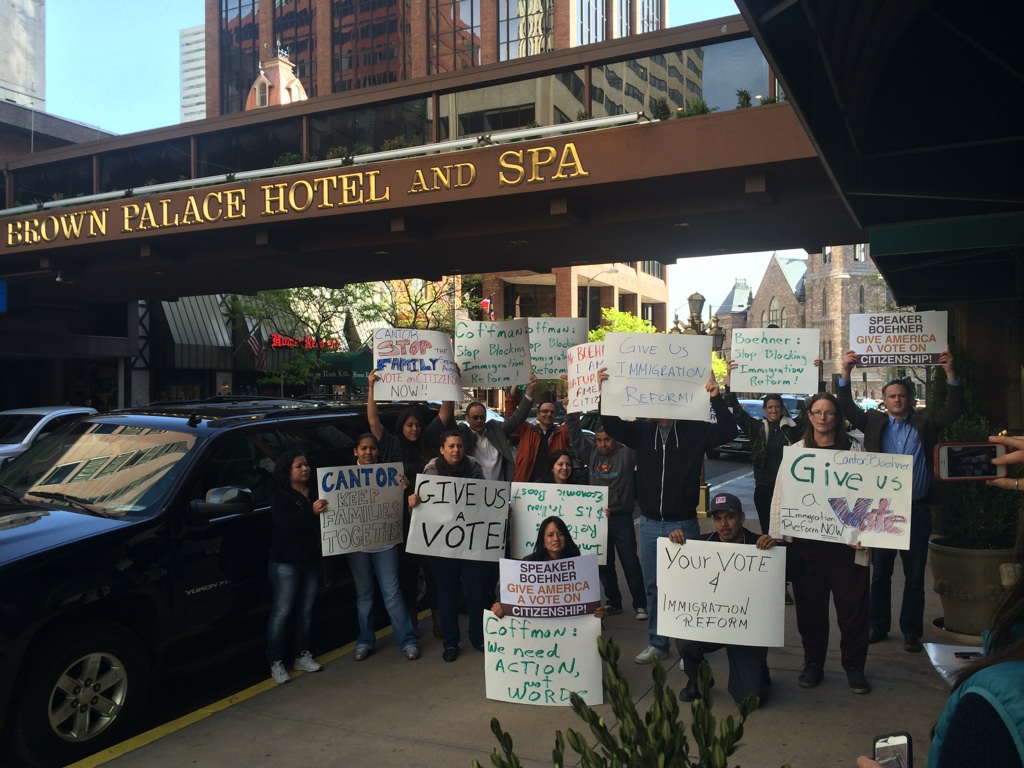 Advocates for immigration reform protested outside Denver’s Brown Palace, decrying policy positions of the House leaders and the long-stalled negotiations in Washington. Many protesters belonged to the Service Employees International Union, whose membership is largely made up of immigrants. The union has made immigration reform a top priority.

At what was billed a “pro-Israel” breakfast, sponsored by former Sen. Bill Armstrong and former Gov. Bill Owens, Cantor decried what he called the Obama administration’s inaction on Syria, implying the administration was responsible on some level for continuing conflict in that country, including the rebel rocket attack that today killed 13 in the northern city of Aleppo. Cantor said Russian President Vladimir Putin “saw that – no consequences,” which he suggested prompting Putin to move into Crimea unafraid of response from Washington.

Surprise action outside Denver's Brown Palace Hotel this morning, as a press release from a coalition of groups including Together Colorado and the Colorado Immigration Reform Coalition (CIRC) explains:

Outside a fundraiser headlined by House Speaker John Boehner (R-OH) and Majority Leader Eric Cantor (R-VA) for Rep. Mike Coffman (R-CO) today, local leaders staged a rally to protest the fact that these three House Republicans are key obstacles standing in the way of immigration reform that would keep Colorado immigrant families together. It has been 322 days since the Senate passed a bipartisan immigration bill, but Speaker Boehner and House Republicans have refused to take up that bill or an immigration reform plan of their own.

“As a longtime voter in Congressional District 6, I’m disappointed in the lack of leadership from Mike Coffman and Republicans in charge of the House. They talk and talk about immigration reform at the same time that they are actively blocking a vote on legislation that would help thousands of Colorado families,” said Rebecca Torres, Executive board member and SEIU Local 105 member. “We won’t forget their hypocrisy when we go to the polls this November.”

Representatives like Mike Coffman, who come from diverse districts where many would benefit from this legislation have the obligation to push their party to make reform happen. Today, local leaders made clear to voters in CD-6 that Mike Coffman may have said he supports reform, but he has refused to act and is actively blocking the passage of immigration reform. [Pols emphasis]

And as Diane Pritchard, another CD-6 voter and leader with Together Colorado Action, emphasized, in addition to the political imperative, Republicans also have a moral obligation to address immigration reform. “The broken immigration system is tearing apart our immigrant families.  The Republican House leadership and Congressman Coffman have not done anything to move reform forward.  Mike Coffman’s constituents want a vote on immigration reform.”

"The message is clear. Voters will remember in November if the Republican leadership and Congressman Coffman continue to block and prevent a vote on immigration reform in the House," said Julien Ross, Executive Director of CIRC Action Fund, Colorado's statewide immigrant advocacy organization. "The stakes are simply too high and too urgent for Colorado families facing separation, and for Colorado's economy that is dependent on immigration reform for continued prosperity."

As House Republicans continue to obstruct a vote, their Party only moves closer to the edge of the “demographic cliff” that will ruin their chance with Latino, Asian and immigrant voters for years to come.  As activists reminded Coffman today, saying nice things about immigration is not enough.  He needs a real legislative victory to take home to voters if he wants his party to survive.

“Quite simply, the House needs to generate a legislative proposal that addresses the status, legalization and earned citizenship process of the close to 11 million undocumented immigrants in America and with the growing Latino population in Colorado. Rep. Coffman needs to be one of those leaders in the House,” said Carla Castedo, Mi Familia Vota State Director.

“If Mike Coffman thinks he can just say some nice things about immigration reform, but then refuse to support the actual legislation, he should think again.” said Patty Kupfer, Managing Director of America’s Voice. “The window for action from Republicans is closing and John Boehner, Eric Cantor and Mike Coffman will all share in the blame if they block reform. Do they really want to taint their party once and for all with the fastest growing group of voters in the state and the country?”

One of the effects of Rep. Mike Coffman's lip service to the idea of reforming the nation's immigration system has been very delicate public treatment of Coffman on the issue, for as long as proponents had any reason to believe Coffman might be helpful. The problem is that Coffman's words have never been backed up by actual votes, and Coffman's inability (or unwillingness) to prevail on leadership in the U.S. House to prioritize the issue is increasingly a sore point among the same immigration activists Coffman has been courting.

Lots of Democrats we know have maintained from the outset that giving Coffman "maneuvering room" on immigration was a futile exercise, and that Coffman was knowingly exploiting immigration activists to extend his embattled political career. Seeing Coffman at a fundraiser with Republican House Speaker John Boehner and Majority Leader Eric Cantor merely adds insult to injury, and lends credence to the more cynical view of Coffman's motives.

Based on the comments in this release, though, Coffman is about out of time.