Many hundreds of thousands of jobs will be lost…um, no.

Today's U.S. Senate vote on increasing the federal minimum wage brought out the best (or worst) arguments from opponents of the proposed legislation.

Many of those arguments, like the one you see at right, focused on the scare tactic of projecting massive job losses from a minimum wage increase. In this particular case, the Tweet at right says that "raising the minimum wage will cost Coloradans 100's of thousands of jobs."

Similar arguments have been made in Colorado regarding jobs and fracking.You can't restrict fracking!!! That will cost Colorado 500,000 jobs!!!

With all of these big numbers floating around, it made us wonder: Exactly how many jobs are there in Colorado? Is this kind of growth even remotely possible?

So, with those questions in mind, we took a little tour through the website of the Colorado Department of Labor and Employment, and more specifically, the section on labor statistics. What we found is pretty much along the lines of what we thought we'd find: It is ridiculous to claim that anything specific could increase or decrease the number of Colorado jobs by 100,000 or more. We even made a graphic about it. Want to see it? Here it goes: 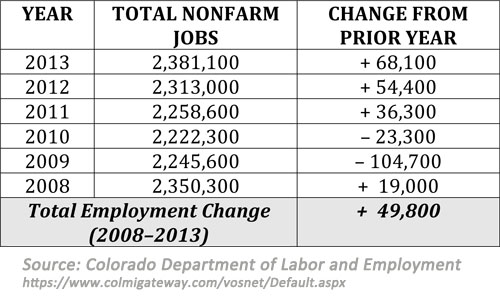 This here is what they call a ‘graphic’ or ‘chart.’

As you can see from the aforementioned graphical chart thing that we produced, Colorado added a total of about 49,800 jobs in the last 6 years combined. That's every industry we're talking about — including the oil and gas industry.

With total nonfarm jobs in Colorado somewhere around 2.4 million, it would take an effort of gargantuan proportion to add or subtract many hundreds of thousands of jobs. You could argue with a straight face that 300,000 jobs will be added/subtracted over the course of several decades, but that's not really the implication in these talking points, now is it?

There are many arguments to be made for and against any subject, but once you start throwing big numbers around as casually as you might close important roads just to be a dick*, then you're really drifting into the land of imaginary facts. You're making shit up, in other words.

*Take that, Chris Christie! Go insult some other state!