How About Those Bush Family Ties, Walker Stapleton? 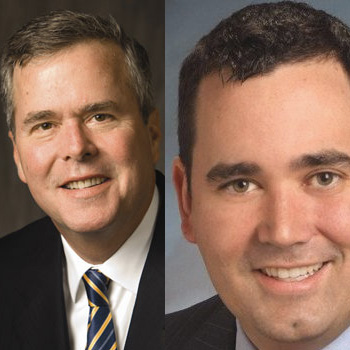 The Denver Post's Lynn Bartels reported yesterday, Treasurer Walker Stapleton is getting some family help from former Florida Gov. Jeb Bush at a fundraiser next month.

Oh wait, you didn't actually know Walker Stapleton is a member of the illustrious Bush family, did you? It's not a secret of course, but judging from cousin Jeb's favorability ratings in yesterday's Quinnipiac University poll of Colorado voters, it may not be something Stapleton wants to lead with:

Jeb Bush, who is coming to Colorado next month for a fundraiser for state Treasurer Walker Stapleton, has some work to do when it comes to raising his appeal in the Centennial State.

A new poll released today by Quinnipiac University shows Bush with the most lopsided favorability ratings of all the potential 2016 presidential candidates. Only 29 percent of Coloradans have a favorable opinion of him, while 40 percent have an unfavorable opinion. Another 30 percent hadn’t heard enough about him to form an opinion.

Bush said Wednesday he is thinking of running for president, his strongest statement yet about the 2016 contest.

Those numbers don't bode well for a third Bush as President of the United States, folks.

Just so everybody's clear, Colorado Treasurer Walker Stapleton's first name Walker is also George Walker Bush's middle name, and one of George Herbert Walker Bush's middle names, and if you didn't already know this, George W. Bush (and Jeb, naturally) is Walker Stapleton's second cousin. Stapleton's 2006 wedding was held at the Bush family's Kennebunkport, Maine peninsular compound named Walker's Point. The Washington Post reported that Stapleton was working out with George W. Bush when Bush got the call in 2000 that the election in Florida was going haywire. We were obliged to note all of this again for the record back in 2010 when Stapleton rather ludicrously said on the campaign trail:

I’m proud to say I’ve never been part of inside politics.

After being in office four years, not to mention cousin Jeb coming to town, hopefully he's dispensed with that.

With all of this in mind, here's our question: if Stapleton's Bush family lineage was more broadly known, how would Colorado voters respond to that in this year's elections? Might cousin Jeb's low approval ratings be any guide?