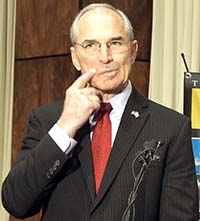 Bob Beauprez does not approve of Sharia Law being implemented in Colorado. Just so we’re clear.

Check out this audio clip of Republican Gubernatorial candidate Bob Beauprez taking questions at a GOP event in Weld County last week. We actually held off on posting this yesterday because we didn't want readers to think this was an April Fool's joke. It is not.

In the clip below, Beauprez answers a question about what he would do to prevent Sharia Law from being implemented in Colorado, which is apparently a concern for some people.

Question: What would you do or not do to stop the implementation of Sharia Law here in Colorado. For any of you who don’t know what that is, it is the martial law that is being implemented in Afghanistan, Iraq, Iran. It’s being implemented now in some of the states here in the United States.

Bob Beauprez: You’re on a very good point. It is creeping in. It’s creeping in not only in Colorado, but all across America. And it’s in this same nutty realm of social justice and tolerance, diversity, and 'can’t we all get along.' You remember the mosque case at Ground Zero.  You talk about nuts. And there was a whole lot of people who bent over backwards to say, 'Oh no, this is religious tolerance.' Well, there’s a difference between being tolerant and being stupid.

Lipstick doesn’t change the fact that it’s still a pig. There are a great many people that are Muslim, that embrace the Islamic faith. They’re decent people — I know some. But you can’t ignore the fact that many of them are extreme radicals that are sworn to our destruction. The destruction of us as individuals, the destruction of Western Civilization. We need to recognize that for what it is and fight back against it.

Maybe we're wrong, and Greeley is now holding public stonings — not the marijuana kind — in the town square. Otherwise, it's hard to understand what Beauprez even thinks he's talking about here. Colorado has a pretty low percentage of Muslim residents, and Islam is not even the most popular non-Christian religion in our state (Buddhism tops that list).

Beauprez may not be the brightest bulb in the political lamp, but we're a little surprised to see him paying lip service to a very old and idiotic "Muslim Brotherhood is taking over the United States" conspiracy theory that even Evangelicals and right-wing talk show hosts have largely abandoned. Maybe Bob is still working off of a 2006 list of conservative talking points.