Last October the Republican Liberty Caucus of Colorado awarded Jefferson County Republican Rep. Justin Everett with its "Goldwater Award," in recognition of the Colorado elected official who most represents the values of one Barry Goldwater (The RLC of Colorado is so conservative that they recently announced that they won't endorse any of the Republican candidates for Governor).

In announcing their award for Rep. Everett, here's what the RLC of Colorado wrote on their website:

This is not a reward for using “liberty” rhetoric.  The most important lesson an activist can learn is to pay attention to a politician’s votes rather than the words they use.   It takes a principled and diligent legislator to work through this myriad of bad legislation and ensure that he votes consistently for liberty.  In 2013, no one more fulfilled the vision of Barry Goldwater or the words of our Liberty Compact than Representative Justin Everett.

If you ask around you will learn that Justin commits long hours outside of the legislative day to understand these bills.  He serves as a resource for others, both in the chamber and in the public, who want to understand a particular bill.  In this way he is more than one vote in favor of our a principles, he is a leader on their behalf. [Pols emphasis]

Maybe this was all true in 2013. But these days, if you ask about Justin Everett around the Capitol, most people will probably ask you if you've seen him anywhere. Rep. Everett is taking the small government rhetoric to new heights — by doing as little "governing" as possible. 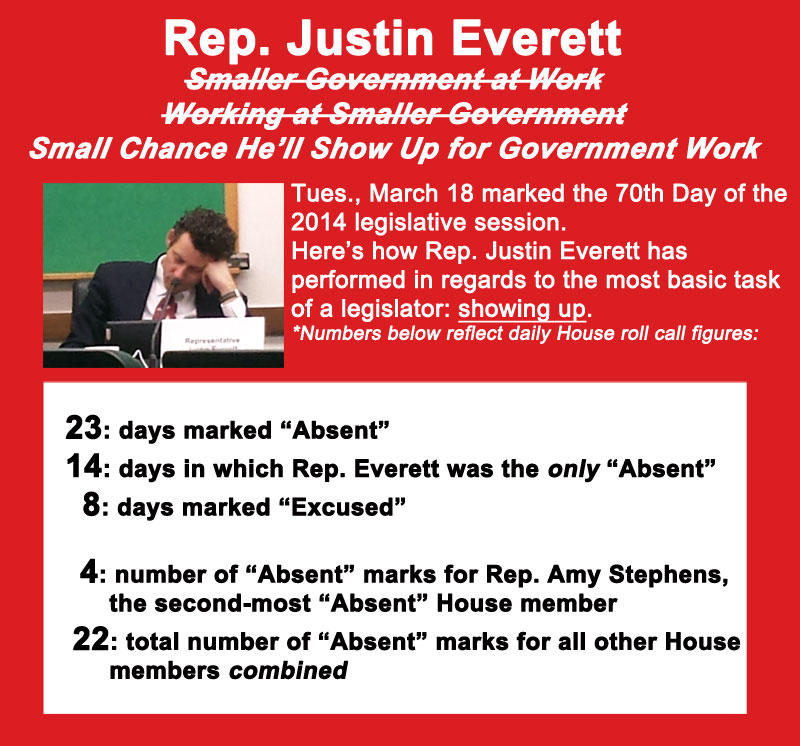 Yesterday, House Minority Leader Brian DelGrosso removed Everett from two committees — "Education" and Transportation and Energy" — with little in the way of explanation. DelGrosso replaced Everett on the "Transportation and Energy" committee with Rep. Jerry Sonnenberg, but left Republicans with a vacancy on "Education." DelGrosso was so mad at Everett that he asked the Sergeant at Arms to escort Everett out of the committee rooms. (Everett remains a member of the "Public Health Care and Human Services" committee; by statute, legislators must be a member of at least one committee). Here's DelGrosso's statement:

“Representative Everett is dealing with some personal issues and I wanted to give him more time to handle them. He was one of a few of our members who are on three committees, so I decided to remove him from two.Representative Everett remains on the House Public Health Care & Human Services Committee and will be reappointed once the issues are resolved.”

So why such harsh treatment? DelGrosso is apparently fed up with Everett's indifference toward his job, and his willingness to vote against the Republican caucus in favor of whatever the Liberty Caucus demands. Everett is frequently late to, well, everything, and he's completely unprepared when he does show up (and manages to stay awake). Everett sponsored the 2014 version of a bill to ban public employee unions, but in a January hearing he seemed unable to answer basic questions about the legislation, presented no witnesses, and watched as the committee took just 8 minutes to reject the bill outright. A bill to ban public employee unions was never going to get any traction in a Democratic-controlled House, but it's unusual for a sponsor to essentially do nothing to support its cause.

Republicans have struggled to convince voters in recent years that they really have Colorado's best interests at heart. This fiasco with Everett is only going to make that impression worse.