WEDNESDAY UPDATE: Hilarity from the Aurora Sentinel today in response to Coffman's "discovery."

QUID HAS HEARD that Aurora’s own congressman Mike Coffman discovered Aurora’s large Ethiopian, Ghanaian, Eritrean, Sudanese and every other African countries’ immigrant population right here in Aurora and he’s eager to spread the good news. In a story written by the Associated Press, Coffman said he visited an Ethiopian church this year (or as we call it, “a church”) in Aurora to celebrate our diversity. Never mind, that he “didn’t understand any of what they were doing … “ according to a recorded conversation posted on the Internet. Hats off to Coffman for making the rounds in his district. Only took him 3 years and a bitter re-election fight to find out Aurora has tens of thousands of African immigrants. Or as his challenger Andrew Romanoff likes to call them, “voters.” [Pols emphasis] 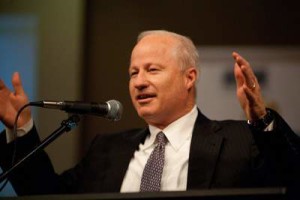 “Then the big drums came out,” Coffman said.

​A brief aside in an AP story by local reporter Nick Riccardi on the subject of immigration reform and embattled Rep. Mike Coffman earlier this month became much more relevant to us today, as we'll explain:

Coffman was elected in 2008 to succeed immigration firebrand Rep. Tom Tancredo, R-Colo. Coffman endorsed Tancredo in the 2010 governor’s race, which he lost, and initially backed measures such as barring U.S. citizenship to children whose parents were in the country without legal permission. Coffman also supported allowing English-only ballots in districts with large immigrant populations.

But his district was redrawn to include immigrant-heavy Aurora. After seeing fast-growing Hispanic and Asian populations overwhelmingly back Democrats in 2012, Coffman embraced citizenship for people brought to the U.S. illegally as children. He announced his new position in Spanish…

In addition to studying Spanish, Coffman has also spent time in his district’s numerous other immigrant communities. Last month he visited an Ethiopian church. [Pols emphasis] But he says he does not support an immigration bill passed by the Senate and prefers more steps to ensure the border is secure before granting legal status.

We've spent a lot of time discussing Coffman's shifting (some might say shifty) views on immigration reform as he attempts to hold his newly competitive seat in Congress. But for today, let's talk about Coffman's visit last month to an Ethiopian Christian church in Aurora. The Denver metro area, with high concentrations in Aurora, has a large community of expatriates from Ethiopia and neighboring Eritrea. One Denver Post story last year pegged the size of the Ethiopian/Eritrean immigrant community in the Denver metro area at 30,000 people.

Coffman is evidently very proud of having visited this Ethiopian church, having told the AP's Riccardi the story as evidence of his having "spent time in his district’s numerous other immigrant communities." But based on this clip of unscripted audio of the same Mike Coffman talking about the same visit to the same Ethiopian church, we have to wonder how illuminating his visit really was.

MIKE COFFMAN: But the, uh, I didn't know there was a large Ethiopian population. [Pols emphasis] I…

WOMAN: And Somali, and Nigerian…

COFFMAN: And Nigerian and Somali! But the, uh, so it was great to go to an Ethiopian church. I didn't understand any of what they were doing… [Pols emphasis]

COFFMAN: But it was a great trip, what was exciting about it is, it started out pretty Western, in terms of the music and everything, and then as it got going, as it got going, then the big drums came out, and the horns came out…

So, uh, this was a church service that Coffman attended? Can you imagine the outcry if a politician from any other culture were to attend an American church and said, "I didn't understand any of what they were doing," and cracked jokes about the music? But perhaps worse, Coffman has been the representative of this district for several years now. Did he really just now discover there is a large Ethiopian population in Aurora?

We assume Coffman didn't intend for these remarks to ever see the light of day, since they make him look like a culturally insensitive idiot. But coming from the guy who once famously said President Barack Obama "is just not an American," maybe lame xenophobic humor is the closest to cultural bridge-building Coffman can manage.