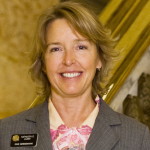 The Coloradoan and the Herald reported last week that the 10th Circuit Court of Appeals has ruled in favor of La Plata County Commissioner Joelle Riddle and, by extension, former State Representative Kathleen Curry of Gunnison in their suit challenging Colorado's campaign finance limits.

The case involved Colorado's limit of individual contributions of $200 per election. If that number seems wrong to you, it's because that number raises to $400 if you are running as a Democrat or Republican, since you might have a primary, (but probably won't).

In the 2010 election, despite running as a write in, Curry lost by only 359 votes. If she had been able to raise double the money, like each of her opponents, she certainly could have won.

In the review of the case, 590 State House and Senate candidates from the Dem and GOP parties were examined and it was determined that only 63 of them had actually faced a primary challenge. Yet, all of them had been allowed to collect twice as much per individual donor and to use all of that money during months immediately before the general election.

Colorado will now be forced to rethink it's campaign finance laws. One proposal is to copy the federal law and require separate accounts for primary and general election funds, and prohibit primary funds from being spent after the primary election date. Another option is to simply drop the charade of primary vs general funds and just let all candidates collect up to $400 regardless of party affiliation. Either way, Colorado election law is a little bit more fair today.