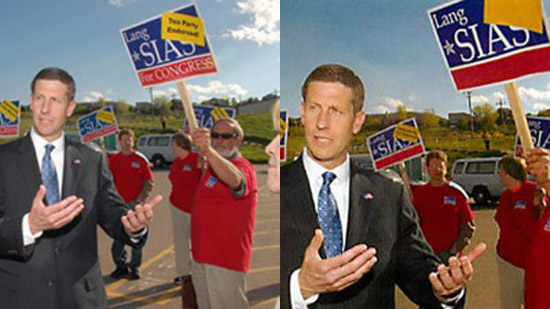 Earlier this week, Republican Lang Sias announced his intentions to run again in Colorado Senate District 19 this year against recently-appointed Sen. Rachel Zenzinger. Sias has made several unsuccessful attempts at elected office in Colorado in recent years, including a failed bid for the 2010 CD-7 nomination (won by Ryan Frazier), and in 2012, a hard-fought loss in SD-19 to then-Sen. Evie Hudak. Sias lost by a relatively small margin in 2012, only 584 votes, in a race that saw thousands of conservative votes "wasted" on a third-party candidate. Sias' bad luck running for office has been compounded by gaffes, such as his "Tea Party Endorsed" signage from 2010 which had the "Tea Party Endorsed" part Photoshopped out for 2012–an incident that made national cable news.

​Perhaps as a result, it appears that Sias won't have a clean shot at the SD-19 GOP nomination in 2014. Already running in this district is Laura Woods, one of the principal organizers of the recall petition drive against Sen. Hudak last year. Woods reportedly has amassed quite a bit of grassroots and gun-rights activist support from her work on the Hudak recall, and there's no reason as of yet to think she plans to get out of Sias' way. Republicans do consider SD-19 a pickup opportunity this year, but it's expected to be a tight enough race to make any uncertainty problematic.

Which of these Republicans would be the better challenger to SD-19's likable new Democratic incumbent, former Arvada councilor Zenzinger? They'll only get one shot, so Republicans had better choose wisely.