Merida Casts Final Votes of Train-Wreck of a Term 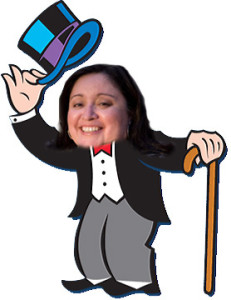 Andrea Merida finally takes her leave from DPS with the same final meeting that she once denied her predecessor.

Thursday was the last regular board meeting for board president Mary Seawell, Jeannie Kaplan and Andrea Merida. Kaplan and Merida make up two-thirds of the camp that some call the last stand for traditional comprehensive neighborhood schools. Seawell, more often than not, has supported the district’s accountability-based reform efforts and charter schools.

But on Thursday, the three came together to form what Kaplan called a “weird” bloc of votes when the board considered renewing a contract with the Escuela Tlatelolco, a school founded by Denver civic rights leader Corky Gonzales.

The northwest Denver charter school, which serves students K-12, has ranked as one of the worst schools in the district for three years. According to the Superintendent Tom Boasberg’s own memo: “Escuela’s TCAP growth has consistently fallen short of District expectations by a wide margin. In addition, the School’s performance is below that of its similar school cluster across subjects.”

Merida was the most the vocal and most upset. She said it was a disservice to the Latino community to allow the school to remain open.

The final board meeting for Seawell, Kaplan and Merida was certainly more subdued than Merida's 2009 inauguration, when she kicked off a controversial, and brief, career on the Denver School Board with a strange move; Merida got a court order to allow to her be sworn-in as a new Board member before the traditional end of the final board meeting of her predecessor. Merida's only term on the School Board featured a series of bizarre stories, from grossly over-spending on her district-supplied credit card to publicly criticizing former DPS Chief (and then-U.S. Senator) Michael Bennet without disclosing that she was being paid by the campaign of Democratic challenger Andrew Romanoff.

Merida had been running for re-election in 2013 until she (at last) saw the writing on the wall in September and wisely exited the race. Both union organizer Rosario C. de Baca and former City Council President Rosemary Rodriguez had the political experience and fundraising ability to crush Merida (Rodriguez ultimately won the seat).

Whether or not Merida ultimately decides to try a return to politics as a candidate herself is probably a moot point. It would be hard to find another public official in recent memory who made so many high-profile enemies, and demonstrated such inexplicably bad judgment, over such a short period of time. Maybe her name ID is strong enough that she could come back and run for something else in the future, but shaking off the skeletons she stuffed in her closet will likely prevent her from winning another race. And that's probably not a bad thing.