UPDATE: A statement from Sen. Mark Udall a short while ago:

"I have worked for years to bridge the partisan divide in Washington to find common ground with those I may disagree with, but Senate Republicans' ongoing and historic obstruction of highly qualified nominees is unacceptable. This obstruction is allowing a minority in the Legislative Branch to prevent the Executive Branch from doing its job for the American people. Coloradans expect better," Udall said. "Due to a cascade of obstructionism in the Senate, essential Executive Branch positions such as the Secretary of the Defense as well as dozens of judgeships — essential for Main Street businesses and job creators to settle disputes and have their day in court — have seen efforts to block up-or-down votes. These persistent vacancies undermine our economy, public safety and the fundamental promise of a functioning federal government. I did not relish today's vote, but it is necessary to protect the promise of the U.S. Constitution and to get government working again." 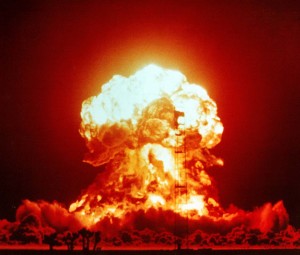 The Senate approved a historic rules change on Thursday by eliminating the use of the filibuster on all presidential nominees except those to the U.S. Supreme Court...

The unprecedented rules change means that President Barack Obama’s judicial and executive branch nominees no longer need to clear a 60-vote threshold to reach the Senate floor and get an up-or-down vote.

Both parties threatened to change the rules in recent years — but Reid said he felt compelled to finally pull the trigger after what he described as unprecedented use of the filibuster on Obama’s judicial picks, namely three blocked judges to the powerful D.C. Circuit Court of Appeals.

“It’s time to change the Senate before this institution becomes obsolete,” Reid said in a lengthy floor speech on Thursday morning.

Both Colorado Senators Mark Udall and Michael Bennet voted in favor of the so-called "nuclear option," long threatened by both sides in different circumstances and finally enacted today. Both Colorado Senators have pushed for reform of the filibuster in some form for as long as they've been in the U.S. Senate. The change made today, while historic, won't affect the ability of Senators to filibuster legislation. The delay faced by nominee for posts in the Obama administration has been far longer than that faced by his predecessor. From the time of committee approval to confirmation, Obama's circuit court nominees–just as one example–have had to wait over 138 days on average–by comparison, George W. Bush's nominees waited 35 days.

With public approval of Congress at unprecedented lows, and partisan gridlock chiefly blamed, something had to give. It's true that the change made today could be used against Democrats at some point should they find themselves in the minority, but the risk to the credibility of the entire institution under the dysfunctional status quo appears to have forced this long-debated action.