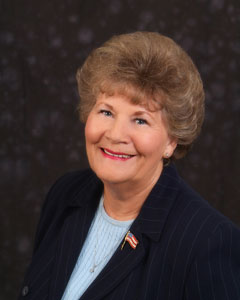 This is Faye Griffin, Jefferson County Commissioner and former Jeffco Treasurer and Jeffco Clerk and Recorder. Griffin has been in elected office in Jefferson County government since 1998, a long record of service that might be commendable if she would stop gaming the system and actually finish an elected job once in awhile. As the Canyon Courier reports:

County Commissioner Faye Griffin is planning to run for Jeffco clerk and recorder — a position she held previously — two years before her current term on the commission ends in 2016.

If elected once again to the clerk job, the Republican said, she would step down as a commissioner. In that event, a GOP vacancy committee would appoint a person to serve the final two years of Griffin’s term.

Griffin is a longtime employee of Jefferson County who was first elected to County Clerk in 1998. The 74-year-old Griffin is a very nice woman who has lived in the county her entire adult life, but that doesn't make you qualified for public office. In truth, she really shouldn't be serving in public office anymore; Griffin means well, but county employees have quietly joked for years that she couldn't find her desk without a staff member. Griffin has been a staple of Jefferson County politics because her name and visage have become so memorable, and in most county-wide races, voters are so little-informed about the offices or candidates that name ID trumps all else. If it hadn't already, Griffin's career on the public dime is being sullied by her manipulation of the system to help other fellow Republicans gain an easy entry into the "Taj Mahal."

– 1998-2006: Griffin elected twice as Jeffco Clerk and Recorder
– 2006: Griffin elected County Treasurer (4-year term)
– 2008: Griffin ditches Treasurer's office to run for County Commissioner. Republican-controlled Commissioners appoint Republican Tim Kauffman to fill remainder of Griffin's term as Treasurer.
– 2010: Kauffman elected to full term as County Treasurer
– 2011: Republican Commissioner Kevin McCasky resigns his seat to take a high-paying job leading the Jefferson County Economic Council (an Independent Ethics Commission later slapped McCasky with a violation for persuading the county to increase its contribution to the Economic Council without informing them that he was seeking the head job). Republican Party vacancy committee appoints John Odom to finish remaining two years of McCasky's term.
– 2012: Griffin re-elected to another 4-year-term as County Commissioner. Democrat Casey Tighe defeats Odom for District 2 Commissioner seat; Odom was so disinterested in the job that he was rarely seen in office and made virtually no effort to win election to a full term despite his name ID advantage.
– 2013: Griffin announces that she will run for Jeffco Clerk and Recorder again in 2014. For the second time in 5 years, Griffin intends to leave an elected position halfway into the 4-year term that voters approved.

If Griffin wins the race for Clerk and Recorder, which she probably will because of her name ID, the Republican Party will fill her Commissioner seat via vacancy committee — the second such vacancy in four years. If Griffin happens to lose the Clerk and Recorder's race, she says, with no sense of irony, that she will serve out her final two years as County Commissioner.

In other words, the only way to get Faye Griffin to finish a full term in elected office is to reject her bid for a different elected office. And that, folks, is Jefferson County government in a nutshell.