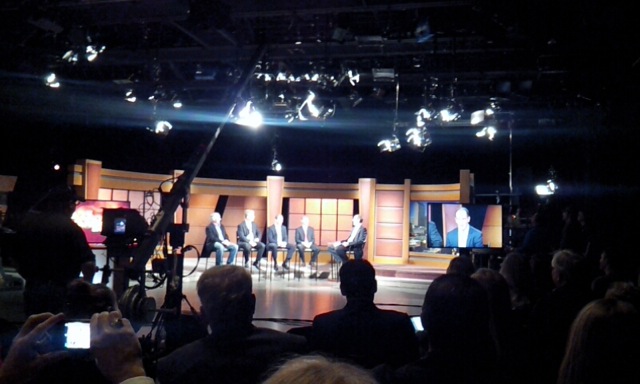 The Durango Herald's Joe Hanel reports on the first debate between the four top Republican Colorado gubernatorial candidates for 2014: Sen. Greg Brophy, former Sen. Mike Kopp, Secretary of State Scott Gessler, and 2010 third-party nominee Tom Tancredo. Yesterday's debate was taped for later airing by the public television Aaron Harber Show. Hanel's story is worth a read, but what may be the most interesting exchange from this debate, for whatever reason, didn't rate a mention. Here's audio and a transcription of the answers by these four candidates to Harber's question about climate change.

The short answer, as you might have guessed, is none of them think it's a problem.

AARON HARBER: Welcome back to the show, we're with our top Republican candidates for Governor, uh, rapid fire segment, for this segment and next segment. Mounting CO2 emissions and levels, concerned about climate change, the belief that this is contributing to global warming. Do you think this is true, and, how you believe if it is how it's affecting Colorado's environment?

GREG BROPHY: No I don't think it's true nor a problem. You know, I run a carbon sequestration factory in eastern Colorado, where we come from we call that a corn farm. So I like CO2 in the air, my corn plants do a good job of putting it into the ground.

HARBER: So you're for more CO2, then.

MIKE KOPP: I'll tell you what, going after a problem like trying to mitigate CO2 can cost millions and millions of dollars, and even if you do have some success, it's immediately eaten up by the likes of China. We're killing people who are just trying to put food on their table. We shouldn't be doing that.

SCOTT GESSLER: I think there's been a lot of hysteria surrounding, uh, CO2. And I think, when you look at, rationally, over the last decade or so, there's not been a, uh, there's actually been a reduction here in the United States. In part, because we've become more efficient than that. And I think the fact of the matter is, when we push out industry, when we hurt our economy, other countries pick up the slack, and pollute more than we ever did. So I don't think that the response we've seen from this government has been right once.

TOM TANCREDO: I saw a great debate a while back between an environmentalist and someone who wasn't, I suppose, who wouldn't categorize that way. She, the environmentalist, was claiming that the earth had gotten warmer as a result of man's action, and the other person said, indeed, that's not the case, in the last few years, it's actually gotten colder. And so, what's happening, which one is it, and she says, well I don't know but it's something though. Right? It's something. Something is changing, yeah, it always is changing. That is the nature of our environment. Our, our, it is so, it's such hubris the idea that we as human beings actually control that process. Um, yes, there is climate change, there always has been, there always will be. And the idea of spending billions of dollars going after CO2, frankly, is silly.

Noted for the record, folks. Climate change deniers one and all. And proud of it…

Although in the case of Brophy, this is the first time we can recall a candidate actively saying that we should have more CO2 in the air.