A couple of months ago, we called out a conservative blog here in Colorado after they misused a particular photo of President Barack Obama embracing Gov. John Hickenlooper in a pejorative context. The photo in question, by Chip Somodevilla and distributed via Getty Images, was in fact taken in the immediate aftermath of the July 20, 2012 mass shooting at the Century 16 theater in Aurora, and depicts Obama embracing Hickenlooper while Sens. Mark Udall and Michael Bennet look on in obvious sorrow. Commenters to the blog in question mocked the sadness on the faces of these Democratic politicians, (hopefully) unaware of the photo's origin. To their credit, Colorado Peak Politics immediately replaced the photo with an inoffensive one after we called them out, and sincerely apologized.

Then yesterday evening, we were forwarded this screengrab from the website of radio shock jock Peter Boyles. Boyles, as readers know, has taken a major media role in the pro-gun recall attempt currently underway against Sen. Evie Hudak of Arvada. 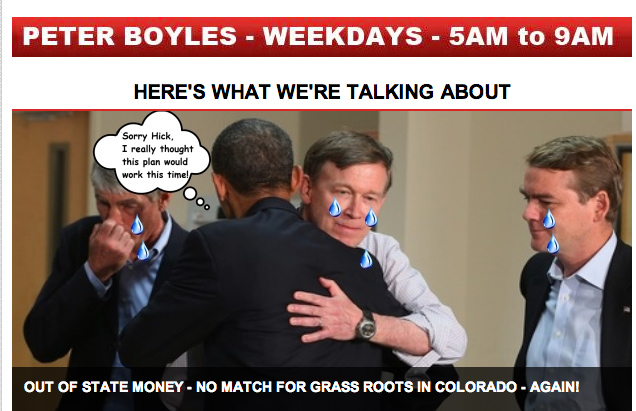 This is the same Getty Images photo taken right after the Aurora shootings that Colorado Peak Politics posted. As you can see, it's been…accentuated to show how, well, you know, how sad they all are. There's little doubt at this point that whoever edited this photo was aware of its origin–it's in the metadata of the original image–and even if they weren't, they could have found out why these Democrats looked sad in about five seconds of Googling. Heck, Boyles himself claims he's a devoted reader of our blog. We called this out already. We did again more recently when Ken Buck's campaign misused a similar photo.

Bottom line: Peter Boyles is a scumbag of the worst order. He is an unrepentant "birther," a comically over-the-top extremist on just about every issue, and as he demonstrated on his way out the door of his last job, fully capable of personal outbursts of violence. The fact that his career survived that incident, and that he is now a central rallying mouthpiece for the ongoing recall movement, is nothing less than an affront to decency.

Monday, shock jock Boyles will defend his sick abuse of this photo. The title of this post is our only reply.