Suffrage, Saran Wrap and Shoe Boxes: A Mom’s Touch in Shaping the Future

Tonight, while the male Senate leaders tied the bow on a deal aimed at ending the government shutdown, the credit for shaping the package is being given to a group of women.  As quoted by Senator John McCain:

“It’s a good outcome” … “Leadership, I must fully admit, was provided primarily by women in the Senate.”

It’s been only 93 years since women were first allowed to vote in a national election: the 1920 Presidential.  A full 50 years after Wyoming first granted it’s Territory’s women the right in 1869.  For many of my female friends, they are only two full generations hence from the day their grandmothers had no such privilege.

Political leaders around the globe are seeking solutions to boost domestic economic growth. Yet today, in the dawn of the 21st century, women are still the most over-looked solution to our global ills.

Each one of us has shaped our behavior and consciousness from our days as children, sometimes to our detriment and other times to our advantage.  Governor Hickenlooper often talks about his frugal mother, who made what she wore and washed the plastic wrap and tin foil for reuse.  It shaped his frugality and business acumen.  John Harpole wrote in a recent guest commentary that his mother saved her utility bills in shoeboxes – for the purpose of predicting what next month’s utility bills would be so that she could better manage the household budget. That experience shaped John’s opinion on the value of cheap energy.  My mother was the second oldest of thirteen children and the oldest daughter.  She was raised on a small dairy farm in Minnesota where no food went to waste at the kitchen table – and no light bulb emitted a single, unnecessary lumen.  To this day I can’t watch the food be wasted – nor drive by a downtown, fully-lit office building at midnight without mumbling under my breath.

Our mothers understood how small acts, and information, affected household budgets.  They knew there had to be fair and equitable rules, and that every household member was expected to contribute in proportion to their ability to do so. 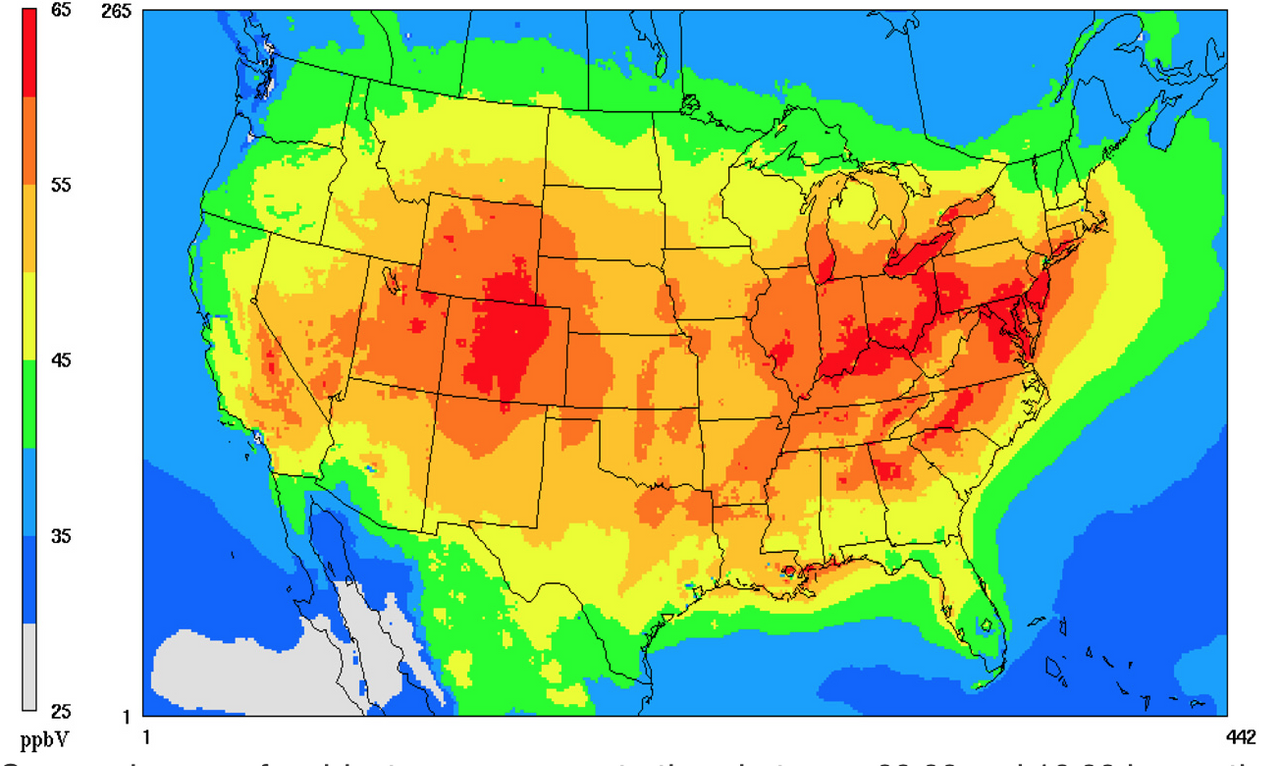 Our regional ecosystem is no different than our homes; no one is unaffected by how we shape public policy on the extraction of our natural resources.  Consider the following seemingly disparate issues. I recently posted an article to bring attention to statewide ozone levels – and why our agricultural organizations should take notice: the ozone concentrations across the nation [as measured by the map to the left] are having a substantial, negative effects on agricultural production according to a recent USDA study.  Public health costs run in parallel with increased ozone concentrations.  Squeezed farm budgets are no match for what the fossil fuel industry can afford to pay for water.  The industry, considered by many to have lax oversight, has caused considerable damage in the recent Colorado floods.  Regarding our revenue challenges, Colorado has arguably foregone $1.3 billion in severance tax revenue since 2002 because of our low tax rates on the industry.  At the same time, we face the daunting challenge of funding what is estimated to be a billion-dollar hole in our state education budget and thus, the viability of our public education system.

Coloradans are not getting their fair share of this industry’s economic benefits, but are absorbing an ever-increasing share of costs, public health effects, negative impacts on their communities, and environmental effects to their air, water, and groundwater.  To wit: in 2005, Colorado collected $132 million in severance taxes. In Wyoming, an identical amount of oil and gas production would have raised $382 million; in New Mexico it would have brought in $479 million.  It’s estimated that 75% of our state’s oil and gas wells pay no severance tax at all due to a myriad legal and local exemptions; offsets embedded in Colorado’s Byzantine statutes.

These dots shouldn’t be that hard to connect.

With all due respect to both the Governor and Mr. Harpole, not one of these challenges can or should be looked at in a silo. They are integrated components of our system that act in concert.  “Cheap gas,” “cheap coal” and “cheap food” are rarely “cheap.”  We live in a society where we know the price of everything and the cost of nothing; “cheap” has become a pervasive industry code word for “we’ll internalize the profits, but externalize the costs by socializing the environmental fallout and the risks and damage to human and ecosystem health, and to Colorado communities.

Counter-intuitively, our state economy functioned more rationally when we had higher natural gas prices.  It’s the same in farm country – our communities are better off when we have $7 wheat than when we have $3 wheat.  All ships rise with the tide in one way or another.  Higher natural gas costs spur innovation around efficiency and conservation; it “raises the stakes” in how we deal with our waste products. “Cheap” natural gas is a lot of hot air.

Cheap gas is giving us a plethora of societal challenges, not the least of which are situations like the one in the Bakken Field in North Dakota:  $100 million worth of energy going up in flames every month.  The culprit: “cheap gas.”  Our “free market” has failed; there is no rational economic argument for capturing this finite resource and converting it to a product under free-market principles.  Instead of the market’s doing what it is supposed to do, industry dominance in the political sphere – both at the state and federal levels – subverts these market signals. This profligate display of American waste can be seen from satellites in space; from space, the state of North Dakota now lights up like a major metropolitan city.

My paternal grandmother often said, “none of us can be as dumb as all of us.” 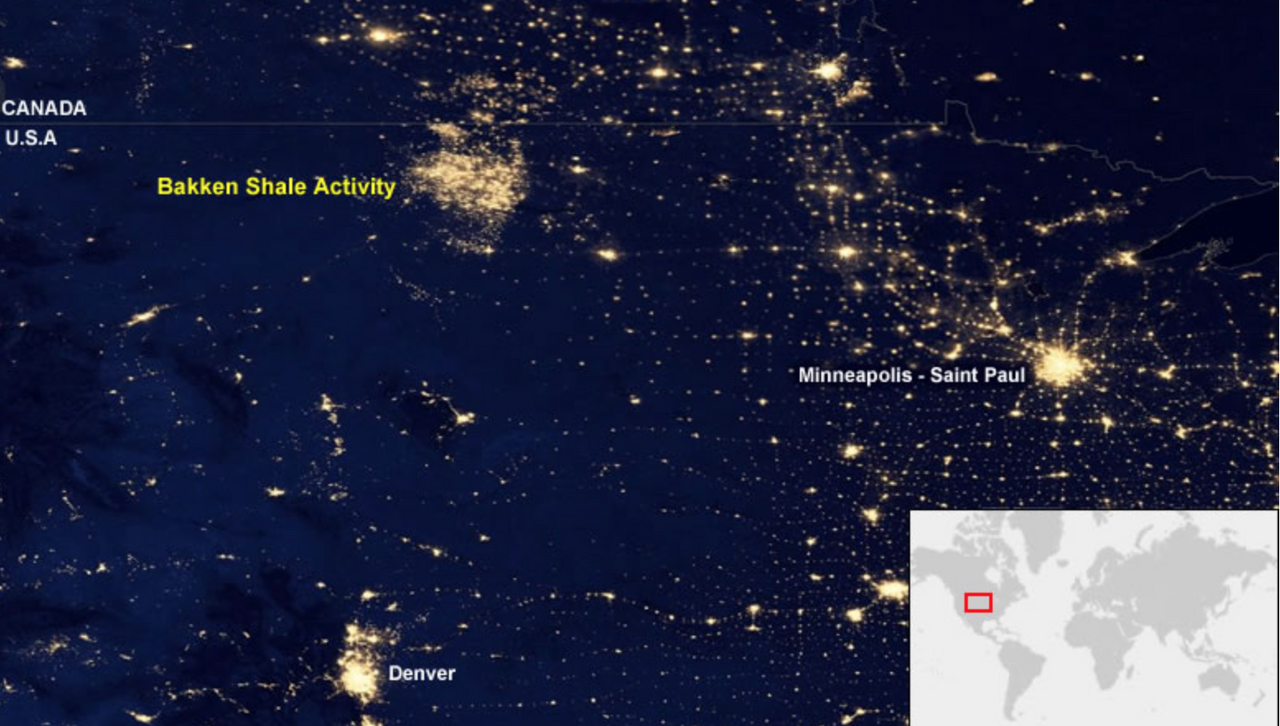 Let that soak in for just a moment:  $100 million worth of energy up in flames.  Each and every month.  Because cheap gas can’t make the case for innovation or conservation.  If Mrs. Hickenlooper, Mrs. Harpole, or Mrs. Bowman were running this “household” – someone’s arse would be subjected to the washing stick and then be grounded.  This waste alone would supplant the proposed cuts [$4 billion over five years] to children’s nutrition in the Senate version of the Farm Bill.

Back home we have a significant state initiative envisioned and implemented by Governor Hickenlooper, the Colorado Innovation Network.  Focusing on our state as an “Innovation Economy,” this network is rich in human, natural and capital resources.  We can set the pace for some of the most forward-thinking initiatives in the world.  There’s no better place than our Centennial State to start applying that mantra to the natural gas industry: best-practices extraction, no fugitive emissions, and new products made from captured waste streams. Setting a high bar that assures the industry is a positive contributor to every aspect of its effects on our economy, our environment, and our revenue base.

The Colorado Collaboratory, NREL, Colorado State University’s Engines Lab, Colorado School of Mines and Rocky Mountain Institute are precious technical resources in this realm. Organizations like Rocky Mountain Innosphere in Ft. Collins supports our state’s budding entrepreneurs; internationally acclaimed non-profits such as Natural Capitalism are changing the global narrative about how we will do business in the future.

And this is just the “tip of the iceberg” for Colorado resources.  We have an embarrassment of riches.

Bottom line? We don’t have to accept the “North Dakota construct” for fossil extraction in Colorado. The Colorado alarm bells are ringing and we should take heed: a study by a consortium of agencies, led by NOAA, recently measured a stunning 6% to 12% methane leakage over one of the nation’s largest gas fields: the Colorado-Uinta Basin.  The basin is of particular interest because it “produces about 1 percent of total U.S. natural gas” and fracking has increased there over the past decade. This rate of leakage in the basin guts the climate benefits of switching from coal to natural gas.

The good news? Governor Hickenlooper has already has a position:  “zero tolerance for methane emissions”

The opportunity to tackle these emissions challenges will begin in November when Colorado’s Air Pollution Control Division [APCD] submits draft rules to the Air Quality Control Commission [AQCC].  With nine counties already in violation of federal air standards and oil and gas production the number one source for these pollutants, we must assure that list doesn’t grow: today we have over 51,000 wells contributing, unabated, to this problem. This rulemaking is Colorado’s chance to address air pollution and climate change at the same time.  Just like mom, we’ll take inventory, account for everything, and get our house in order.  And we’ll all be better for it.

The upside?  We know how to fix the problems.  Some of the best technology is right under our nose.

The Governor’s first term has not been an easy one, fraught with often national, headline-grabbing events: mass shootings, gun control, the murder of a Cabinet member, historic fires, and floods. Recalls and faux “Wars on Rural Colorado”.  He’s managed those events with grace and sensibility.  And now it’s time for the natural gas industry’s “Saran Wrap Moment”.  Just as our mother’s house rules set the stage for a stable home, so it goes in the gas patch.  Regulations spur innovation; innovation unravels problems and creates jobs.  And for that – we should be unapologetic.

It turns out that Mom is a genius. We should take careful note of her wisdom – and apply her principles of running a household to sound public policy.