UPDATE: CBS4 Denver has a new report on fresh skepticism from Rep. Mike Coffman today, including an interesting new possible GOP line of attack: should Obama not have gone to Congress then?

“The Assad government has had all the time in the world to move their assets around so they don’t present themselves as easy targets,” he said. [Pols emphasis]

Coffman is not gung-ho for a strike. Not until it’s proven to him it would not lead to a protracted military engagement. He also wonders if Assad is chased from power, what then? 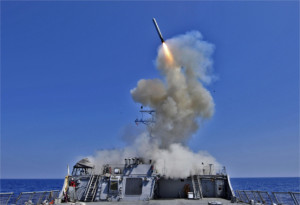 Syria on Sunday gloated over a "historic American retreat," deriding President Barack Obama for his decision to delay what had appeared to be imminent military strikes and dealing a further blow to U.S. credibility among the Syrian opposition and its allies.

The announcement Saturday by Obama that he would seek congressional approval for any U.S. military intervention in Syria, effectively pushing back any potential strike for at least 10 days, was seized upon by Syrian officials and state media, presenting it as a victory for the regime…

Back on the home front, there's bipartisan support in the Colorado congressional delegation for President Barack Obama's choice to seek congressional approval ahead of any military action by the United States against Syria, though from our read of the statements issued by lawmakers, considerably less evident appetite for actually going to war. Colorado Springs Gazette:

"I approve of the president consulting with Congress and seeking congressional support on this important issue. I will be gathering many facts before making any decision," Lamborn, a Colorado Springs Republican, wrote in an email to The Gazette.

Bennet, a Democrat, also stressed in a statement to The Gazette the need for Congress to weigh its options carefully.

"Syria's use of chemical weapons is deplorable. Congress will review the evidence presented by the administration and hold a serious debate about options," he wrote. "We must consider the enormous challenges in the region and the complexity of the situation that includes a military already stretched thin, a nation in civil war, and a region in transition."

Congressman Ed Perlmutter released the following statement after the president's remarks on Syria:

"I agree with President Obama on his decision to provide information to the American people about the horrific use of chemical weapons in Syria that killed at least a thousand innocent people including hundreds of children. It's important for Congress to assess this information and discuss what actions are appropriate to deter this kind of massacre in the future. As the President suggested, any action must be targeted and limited in scope."

Congressman Jared Polis released the following statement after the president's remarks on Syria:

"I look forward to studying the issue, understanding the case that the President makes, and making an informed vote. This is a serious responsibility, and since the President has chosen to consult us I will provide the best possible guidance to the President that I can in the form of my vote and advice regarding Syria."

Rep. Mike Coffman, via the Denver Post's Allison Sherry earlier in the week:

Rep. Mike Coffman, R-Aurora, said he wouldn’t support extended involvement since the United States is not “in danger of an imminent attack.”

“I will support the president should he conduct a limited strike on Syria in order to deter (Syrian President) Assad from further use of chemical weapons, but I would not support involvement beyond that because this is an intractable sectarian struggle,” Coffman said.

We haven't seen a statement from Sen. Mark Udall since President Obama's speech this weekend, but as reported Wednesday:

"The president needs to explain his plan to the American people, who are understandably reluctant to support further military engagement in the Middle East. I have real concerns that any surgical strike could lead us into deeper involvement in a complicated civil war, but last week's attacks — and the Syrian regime's years-long war against its people — demonstrate that staying on the sidelines may carry risks just as grave," Udall said.

"Committing to place our men and women in harms way is not something to be taken lightly. I will weigh the full evidence available and make a determination once I believe I have the information necessary to make an informed decision in the best interests of the United States."

Rep. Scott Tipton sounds a bit skeptical about the President's decision to ask for permission:

I'm pleased the President is seeking Congressional authorization for the use of military force. There may be a difference however between 'seeking' versus 'asking' for Congressional authorization, and before the President proceeds with any action, I hope that he will allow for equal debate in both the House and Senate on his plan and ultimately adhere to the outcome of the votes we will take.

But interestingly, Democratic Rep. Diana DeGette's statement seems the most skeptical of the actual proposal to go to war:

Bottom line: the President's decision to ask permission before engaging in military action in Syria is extremely risky from a foreign policy viewpoint, as it leaves a decision as consequential as military action to the whim of perhaps the world's most famously dysfunctional body. The constitutional debate over the President's authority to take any military action without consulting Congress is unresolved, and the Obama administration has already tested the limits by committing American forces to action over Libya two years ago without congressional approval.

On the other hand, if Congress, particularly the GOP-controlled House, fails to deliver the authorization Obama is looking for, that could be powerful political ammunition for the president in his long fight against partisan obstruction. We shouldn't have to remind readers that Republicans and the institution of Congress as a whole are losing that fight, as evidenced by the body's historically low approval ratings. Will it take a humanitarian catastrophe in Syria, one that could have been prevented by Congress taking action, to demonstrate to the public that Congress is no longer capable of doing its job?

These questions will factor heavily, rightly or wrongly, while debating the original point of whether to go to war.