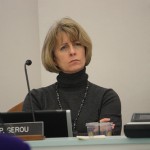 Last February during the gun safety legislation debate, we took brief note of an altercation between the lobbyist for the Rocky Mountain Gun Owners, Joe Neville, and GOP Rep. Cheri Gerou of Evergreen. As we understand the story, Rep. Gerou became upset about undue pressure from RMGO about the gun safety bills (which Gerou was always opposed to), culminating in a heated exchange in which Gerou told Neville to "go fuck yourself." This incident has been cited as just one of many such incidents that have given RMGO and its director Dudley Brown a dubious reputation even among fellow pro-gun conservatives. The Colorado Statesman's Peter Marcus reported at the time:

Neville [was] accused of telling Gerou that she would be the target of political attack mailers after a conversation he had with her on Feb. 15 about gun control legislation. Gerou approached Neville after she received calls and e-mails from constituents who were concerned that she might support the gun control bills, despite her commitment to vote against the four measures. She believes Neville and Rocky Mountain Gun Owners were spreading “lies.”

Standing outside the House chamber, Gerou told Neville to stop disseminating the misinformation. The conversation turned into a heated exchange, in which Gerou allegedly began waving her finger at Neville, ultimately telling him to “fuck off.”

Neville allegedly replied, “You just earned yourself another round of mailers in your district.” 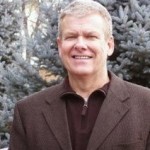 ​Now it appears the Gerou-Neville family feud could be headed for a showdown. Last week, a young Hogan-Lovells attorney named Jonathan Keyser filed to run for Gerou's House District 25 seat. Gerou isn't yet termed out of that seat, but the speculation we're hearing is that Keyser will move into Gerou's seat, while Gerou moves on to challenge former Sen. Tim Neville (father of RMGO's lobbyist Joe) in a GOP primary for the chance to run in Senate District 16 against Sen. Jeanne Nicholson. Neville proudly bills himself as the "RMGO-endorsed candidate" in that race.

A clash between Gerou and Neville would be an acid test of the much-ballyhooed power of the RMGO in Republican primaries. It's not like Gerou is an especially moderate Republican, but her failure to "kiss the ring" this year as the RMGO threw their weight around at the Capitol is an affront that Dudley Brown can't just let slide.

Especially not if Gerou is now the one gunning for the RMGO.