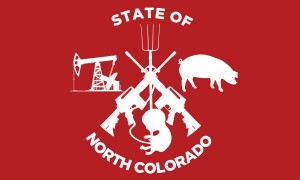 The Denver Post's Adrian Garcia updates on the plot by a number of rural northeastern Colorado counties to secede from the state of Colorado, and form their own new state of "North Colorado." Apparently, and it's not like anybody could have predicted this, but the original plan to secede is not really working out so much:

Fervor for a plan to carve northeastern Colorado into a 51st state has been cooled by legal barriers and a lack of public support, [Pols emphasis] but commissioners from rural counties say they're not done fighting for better representation of their citizens…

[T]he counties now are contemplating the Phillips County Proposal, which would change the way state House districts are represented at the Capitol.

The plan, offered by Phillips County Administrator Randy Schafer, would have representatives elected by county, rather than by population.

That's right, folks, kind of like the U.S. Senate, rural northeast Colorado county commissioners, since outright secession isn't working out like they planned, would now like to turn the Colorado General Assembly into a body elected by county boundaries–not the precisely equal population distribution that guides the legislative reapportionment process every ten years in Colorado, most recently in 2011.

Of course, equal representation of states in the U.S. Senate is one thing, and that is itself not without controversy despite being the express constitutional intent of the Founding Fathers. The idea that Phillips County, Colorado (population 4,500) should be "equally represented" in the Colorado General Assembly with, say, Jefferson County (population 540,000), however, is ridiculous–and unconstitutional per the 1964 Supreme Court decision of Reynolds vs. Sims. If rural Colorado counties feel underrepresented today, imagine how Jefferson County residents would feel when told that a Phillips County vote should be worth one hundred Jefferson County votes in a legislative election.

It seems to us, folks, that proposing to devalue urban and suburban voters in order to be "fair" to rural voters is not much different from the offense rural voters claim against themselves. There's no going back: Colorado's population is changing, and it is urbanizing, and that does inevitably mean the power is shifting away from rural areas to population centers. In a society where everyone is equal, population is power and it always will be. Even most rural voters understand that, which explains the lack of public support for secession reported above. And they know that when you get down to it, Coloradans in Jefferson County aren't really that different from those in Phillips County.

That said, penny-ante rural politicians have an equal right to waste their time.