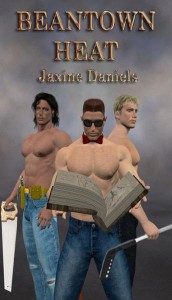 A pearl-clutching Paradis  censored the juicy bits out of an "EXPLICIT & GROSS" excerpt quoted in his email, but methinks the creativity of Polsters will serve to fill gaps:

My personal favorite synopsis, from 2006's "Promise to Believe," appears to be an attempt to cash in on the horror-rotica trend started by the outsized success of Twilight:

Does love endure the grave? Are soul mates, cheated once, given a second chance to love? Or is that madness, the stuff of fairy tales? When Griffin Leroy is given a dream job, to take three old Creole town houses and turn them into a bed and breakfast, her life and sanity are nearly destroyed as she searches for answers and waits for a man who may not even exist. From the daytime world of interior design, to the night-time world of sensual dreams and erotic fantasy, Promise to Believe is a simple love story. A story of hope. A story of promises made, promises remembered, promises kept. Despite the ultimate obstacle.

Whatever motives Paradis may have had in outing Bubis, if it hadn't been him, it'd be someone else. She's using the same first name and her own mugshot as Jaxine Daniels, plus an all too accurate personal bio about her Colorado roots. What remains to be seen is how the neonatal candidate will handle scrutiny of her Fifty Shades-esque alter ego.

She's not off to a great start. The daily Denver paper reports that Bubis denounced "malicious attacks" and called criticism "intimidation of regular, everyday citizens participating in politics." Way to get sleazily defensive about something that–quite frankly–she only needs to apologize for at all because of the ultra-conservative company she chooses to keep. So she wrote some adult fiction. Stephanie Meyer is internationally famous and very, very rich, and she's almost as good an erotica writer as our comma splicing, sentence fragmenting Bubis/Daniels.

Want some unsolicited advice, Grammy? You can drop out of this race, or you can own the living shit out of this, reject the sex-shaming Christian right elements that have endorsed you, and say loud and proud, "I'm here to defend a fiscally conservative, liberty-based ideology that doesn't include peering into other people bedrooms or their bookshelves. I do not want or need the support of organizations or persons who believe that adult Americans aren't capable of choosing their own reading material without help from the nanny state or nanny church."

Sure, your own party will still eat you alive, Grammy, but they're gonna do that now, no matter how you react. At least you can go down with dignity this way–and probably sell a few books, too. May I suggest: "Fifty Shades of Red: A Tale of Republican Love Under the Golden Dome?" Frankly, the phallic gun fetishism that creeps into gun safety debates on the regular would seem to suggest that at least a few in your party could benefit from a little more erotica in their lives.

PS. Boy, aren't you going to be embarrassed if the recall petition is thrown out on appeal and you just lost your secret identity for nothing whatsoever?