We don't typically pay much attention to local conservative blogs, generally for qualitative reasons. But earlier this week, a local conservative blog wrote up the story that Colorado is opening a one-person office in Washington, D.C. to advocate on behalf of the state. As the Denver Post's Allison Sherry reported:

The state is now among 32 other states that have offices or advocates in Washington.

The one-person office, headed by Colorado native and lawyer Jena Griswold, will monitor legislation on Capitol Hill and comb for federal grant opportunities in the executive branch.

The local conservative blog in question chose to "satirize" the opening of this office with a Getty Images photo that is, in the context they used it, about as tasteless as it gets: 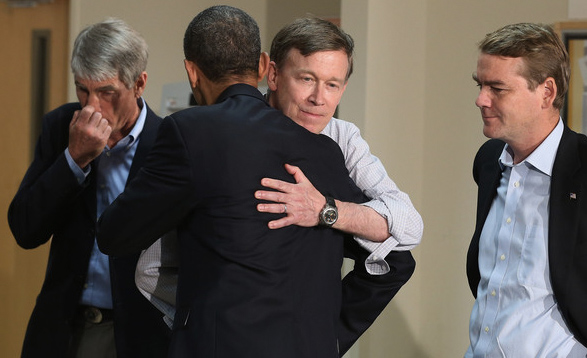 Eliciting such comments from that blog's readers as:

The fact is, there's a good reason why nobody looks happy in that photo, and why President Barack Obama is embracing Gov. Hickenlooper–and it has nothing to do with politics. This photo was taken at the University of Colorado Hospital in Aurora on July 22, 2012. The reason they look somber is they had just visited with victims of the mass shooting at the Century Theater in Aurora, Colorado two days before.

Folks, we get that politics is a rough-and-tumble business, and we generally enjoy sharp-elbowed commentary on both sides. Like we said, our local conservatives don't often deliver good quality content, but they make up for that with nonstop, bitterly caustic anger toward all Democrats everywhere.

This "attack," even by those standards, is simply not appropriate.