After pointing to Rep. Mike Coffman after the last election as a national model of a winning candidate, in a swing district, who “maintained his 100% pro-life position,” including his opposition to abortion for rape, Jennifer Mason, communications director of the anti-abortion group Personhood USA, is disappointed by Coffman’s statement yesterday that he now “strongly” supports the “exceptions for rape, incest, and protecting the life of the mother” that were included in a House bill banning abortion after a woman is 20-weeks pregnant.

Coffman joined nearly all House Republicans in supporting the abortion ban, and he issued a statement yesterday reiterating his “yes” vote, as well as his support for the rape-and-incest exceptions included in the proposed law.

Coffman’s support for the legislation shouldn’t have surprised reporters, given his track record on the abortion issue, but his decision to back exceptions to the abortion ban should’ve caught the attention of journalists–even if they might have suspected this was coming as Coffman, widely viewed as one of the most endangered Congressman in the country, fights for his political life against Democrat Andrew Romanoff.

Yet, I’ve seen almost zero news coverage of Coffman’s abortion statement. What’s Coffman’s explanation? What’s the reaction of people like Personhood USA’s Mason, who stood with Coffman in the past.

So I contacted Mason to fill in the media gap.

“It is not uncommon for politicians to lose moral ground once they are elected, Mason wrote via email. “Mike Coffman’s vote for the death penalty for babies conceived in rape is very disappointing. Let’s call it like it is: so-called ‘exceptions’ for babies conceived in rape are not exceptions at all. They are compromises that allow for innocent children to be killed. Every compromise causes us to lose ground, catering to our opposition’s demand to de-value human life. We expect better from our elected officials.”

I also asked Leslie Hanks, former President of Colorado Right to Life, for her reaction to Coffman’s new remarks.

Hanks sent me a photo reply, below, of two women holding signs with pictures of apparent fetuses and these messages: “I did not choose to have a rapist for a father. Must I die because of it?” And: “I am not of clump of cells. I am a human being.”

The Denver media embarrassed itself during the last election by essentially failing to question Coffman about his opposition to abortion, even in the case of rape and incest.

The details of Coffman’s thinking, why he’d come to take such a hard-line stance, fell through the journalistic cracks, as Coffman repeatedly told audiences that he’s “not focused on social issues.”

Now journalists are letting Coffman slide by again, as he suddenly supports abortion for rape, without finding out what’s up. When will they start questioning the Congressman on abortion issues? 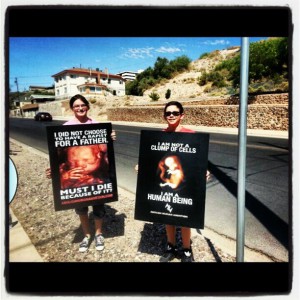