UPDATE: A photo forwarded to us from today's press conference announcing the lawsuit against Colorado's new gun safety bills, Dave Kopel of the Independence Institute on the right: 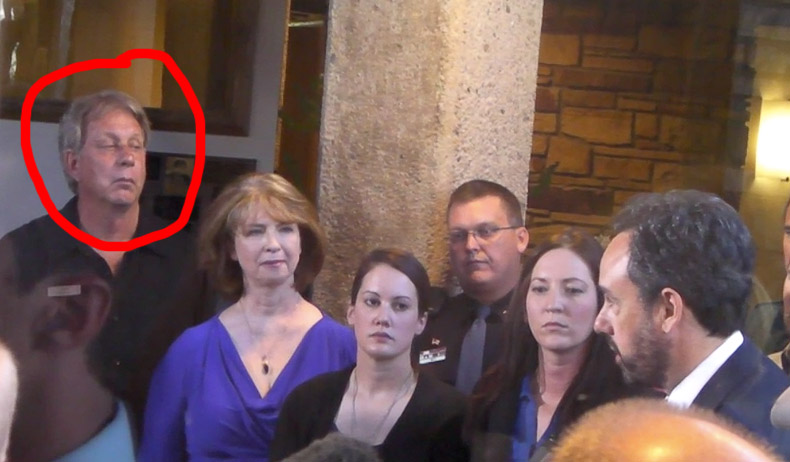 See the man in the black shirt on the left? That's Clint Webster, a 2010 GOP candidate for House District 24.

What's so special about Clint Webster, you ask? We reported on Mr. Webster as part of a 2010 release of the criminal records of a number of legislative candidates, mostly Republican:

Webster was arrested in 1987 for disturbing the peace, and in 1991 for assault. Webster pleaded guilty to felony assault and menacing. The arrest report obtained from the Jefferson County Sheriff shows that Webster was apprehended after firing two shots from a semi-automatic pistol at his ex-wife. [Pols emphasis] When asked by arresting officers what his intention was when he fired, Webster stated something along the lines that he had warned his wife to stop bothering him and had even threatened to kill her, yet she ‘showed up at his home anyway.’

The Denver Post's editorial board had this to say about Webster's 2010 bid:

Many of the infractions are examples of poor judgment that occurred during candidates' younger years. But some ought to take them out of the running. Take Republican Clint Webster of Lakewood, who is running against Rep. Sue Schafer, D-Wheat Ridge, for the House District 24 seat…

Though that charge was dismissed, a more troubling incident arose in 1991. Webster was arrested after threatening to kill his ex-wife and firing two shots at her and another person from a pistol as they drove away from his house.

"I said I was going to shoot, not kill."

Now, what do you suppose Clint Webster, of all people, was doing at this press conference today?

We can't shake the sense of amazement: these same county sheriffs stood before the Colorado legislature this year and testified against Senate Bill 197, a bill to protect victims of domestic violence from partners with guns. Today, they're standing with one of the worst Republican mistakes of the 2010 election season, a man whose biggest claim to fame is having fired shots at his wife?

Hubris, folks. There's no other word to describe it. Original post follows.

This violates the Supreme Court's rule in District of Columbia v. Heller against prohibiting arms which are "typically possessed by law-abiding citizens for lawful purposes."

Another problem with the magazine ban is the requirement for "continuous possession" of grandfathered magazines. This makes it illegal for a wife to let her husband use her magazine for self-defense, or to borrow her magazine and take it to a target range.

Because disabled citizens cannot change magazines rapidly, their fundamental right to self-defense in the home is especially threatened by the magazine ban.

House Bill 1229 imposes an unworkable system of mandatory fees and background checks on many temporary transfers of firearms. Programs which foster participation by disabled persons and by other persons in outdoor sports will be prohibited from lending a firearm to someone for a hunting trip. Family farms which are organized as a corporation will have to pay $22 per family member and farmhand for background checks every time the farm purchases a gun.

There you have it–the court case summarizing the GOP's longstanding arguments against these two bills. Proponents have argued that most of these contentions are either baseless or wildly overstated, and in any event compatible with precedent and the Supreme Court's extant interpretations of the Second Amendment. The sweeping charge that House Bill 1224 "indirectly" bans "most" magazines, with removable floorplates or any number of other imaginative ways of being "modified," is one of the most dubious claims made by opponents of these bills, including Jon Caldara of the Independence Institute–and is very likely to be invalidated by forthcoming Department of Public Safety enforcement guidelines interpreting the bill's plain language.

So naturally, they're going to make it while they can.

Something to keep in mind is that the elected county sheriffs involved in this lawsuit, though a numerical majority, don't represent some of the state's most populated areas, particularly Denver. As we and others have written about in this space, some of the most prominent among these county sheriffs in this lawsuit, like Larimer County Sheriff Justin Smith and Weld County Sheriff John Cooke, have been pushed to the fringe in their primary election campaigns by the efforts of Rocky Mountain Gun Owners–and have endorsed positions on gun safety that cannot be called responsible.

With all of that said, Colorado is not the only state to have enacted magazine limits and universal background checks in recent years, and a larger judicial review of issues in these new laws unresolved by previous Supreme Court decisions was always inevitable. Above all, this is an unparalleled opportunity for Dave Kopel and the Independence Institute to raise funds, which they are eagerly doing–and we expect very successfully.

So welcome back, friends, to the show that never ends.