The Revenge of the Faux-Hawk: Mark Barrington Running for Lakewood City Council

Politicos looking to measure the depth of the Republican bench in Lakewood need look no further than Mark Barrington. We first wrote about Barrington, his bizarre take on the issues, and his even more bizarre fashion sense, in the lead up to last November’s election. Barrington was the bright-eyed and lot-lizard tied Republican candidate taking on Rep. Andy Kerr in HD-26. 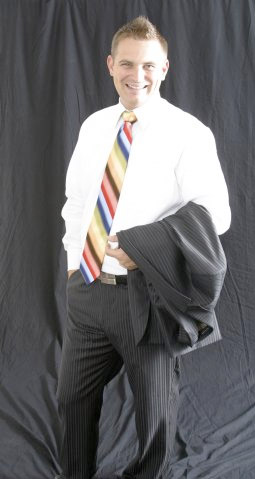 Though no Republican would have an easy time running against the popular Representative Kerr, Barrington did an especially bad job. He raised less than $10,000 over the course of the campaign. Sure, the the 13% margin was Kerr’s closest ever, but that was more a function of 2010’s political climate than any inherent political ability on Barrington’s part.

While the young Republican might have been thoroughly trounced in his last bid for public office, it still comes as no surprise that he’s on the ballot again this cycle, this time as a candidate for Lakewood’s open seat in Ward 3. Barrington clearly values himself as some sort of cunning political operator; unfortunately, voters just don’t see him that way. Barrington was unable to sway even the five member committee of activist Republicans during the vacancy appointment to fill Kevin McCasky’s old commission seat. In fact, if Barrington’s an expert on anything, it’s blowing elections: in his first bid for Council in 2005, he came in third, ultimately losing by more than 20% to Ward 3 Councilwoman Sue King.

Why, then, is Barrington making another go for a constituency which has already so soundly refused to elect him? Perhaps he’s using it as the foundation to launch his glamour shot modeling career. Perhaps he really enjoys being “that guy with the faux-hawk,” or “that guy who can never quite seem to be relevant.” Either way, Barrington is back, and we hope his campaign for City Council can be even half as entertaining as the race he ran for the state house.

Of course, other candidates have lost in bids for council before they returned in the next cycle and won a seat; Ward 1 Councilwoman Karen Kellan shines as a bright example of the legislative talent persistence can bring. Mark Barrington is no Karen Kellen, but there does exist the slight possibility that Barrington could actually win this seat. In an election in which voters have little reason to pay attention, Barrington’s name ID from his previous two campaigns may raise his profile above competitors Pedro Roybal and Carolyn Evans, much in the same way even Ramey Johnson has a natural advantage in her race. Barrington may also benefit from the fact that he’s the only Republican running; Roybal and Evans are both Democrats, so even in a non-partisan election, Barrington alone can court Republican donors while Roybal and Evans must themselves compete for Democratic movers and shakers.  There’s also a case to be made for “vote-splitting”; that Roybal and Evans will both earn enough share of the “Democratic” vote that their candidacies will cancel each other out and allow Barrington to cruise to victory. While we admit that the dynamics of a three-way race, especially in Lakewood, are radically different than a traditional campaign, we don’t necessarily buy the argument that voters really care about party ID in these local community races. Even if they did, we think it would take someone way craftier than Mark Barrington to take full advantage of having two opponents with similar ideologies.

With Vicki Stack gone, Barrington has a natural place on City Council. Unfortunately, like Stack in her early years, we think that Barrington would all-too-naturally inheirit the role of an inept curmudgeon, more concerned with half-understood Grover Norquist theories of small government than a responsibility to the city or constituents. Indeed, Barrington’s previous electoral personality will likely be his kiss of death; observers know Mark Barrington and they know what he’s about. Unsurprisingly, you get what you see with the guy possessing the doorstep manner of a used car salesman.  Bob Murphy and the rest of council won’t want to serve with him, and without Murphy’s support, Barrington is just another one of a handful of perpetual candidates floating around Lakewood. It may be Ramey Johnson’s year, but it shouldn’t be Barrington’s, even in the off-chance he does something about that haircut.