A New Feature: “Today In BS”

This year at Colorado Pols, we've faced a real challenge keeping track of the drastically higher volume of unsourced, un-factchecked, and uncritically reported nonsense filling the space between rational debate over the issues affecting Colorado politics during the current legislative session. Particularly with regard to the gun safety debate, but with examples ranging the gamut of legislative agenda items and political issues this year, It has been tougher than ever to even note for the record so many absurdly false statements and claims, let alone give them the critical attention they deserve.

What we're trying to say is, there is more BS clouding Colorado politics today then perhaps ever before.

Meanwhile, as we've discussed repeatedly, the local press seems intent on minutely fact-checking one side of the debate, while allowing irredeemable cockamamie nonsense from the other side to go either unreported or worse, reported without any kind of fact-checking. There are lots of theories for why this is happening, but it may be as simple as a desire to keep the fight "fair"–and as a result, newsworthy to journalists driven to enforce a dogmatic "equivalency" between the two sides. For our part, we have been careful to report gaffes from both Republicans and Democrats this year, and that has emerged as a difference between our coverage and that of most local media. We'll have much more to say about the omissions and systematic misreporting from local media this legislative session in the coming days.

In the meantime, we're starting a new irregular feature called "Today In BS." In an effort to more quickly and comprehensively note for the record brazenly false statements made in Colorado politics, we hope to frequently and briefly post such items with their debunking–and move on. That way, when a local mainstream journalist reprints the name nonsensical allegation a few days/weeks later with no context, you'll already know the truth.

Today's example is a quote being widely attributed by conservatives to Senate President John Morse. 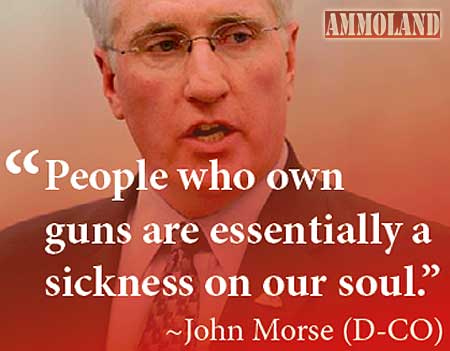 Robert F. Kennedy, after MLK’s assassination, said: “Violence breeds violence, repression breeds retaliation and only a cleansing of our whole society can remove this sickness from our souls.“

Cleansing a sickness from our souls does not come easily.  It is gruesome.  During the last three months we have experienced hatred and vitriol that I have only seen on the street as a police officer.  This has included wishing rape, torture and death on legislators and their families.  It reached its height on Monday and Tuesday as our Senators did their jobs in committee. Sickness…

There's no justification for the "evolution" of this statement from the original verbatim quote of Robert F. Kennedy to the ludicrous version in the graphic above, where Morse is allegedly claiming (see quotes) that "people who own guns are essentially a sickness on our soul."

But that bogus quote now has approximately 16,000 Google search responses.

That's this edition of "Today In BS," folks. We shouldn't have to tell you that there will be many more.