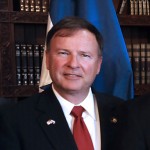 Speaking of North Korean missiles, a fascinating report from Thursday's Christian Science Monitor that we didn't want to escape mention. The scene was a briefing of the House Armed Services Committee by top military brass on the worsening relations between the United States and our allies, and North Korea:

Rep. Doug Lamborn (R) of Colorado began quoting from what he said was an unclassified version of the [Defense Intelligence Agency] report, which has not yet been made public.

Chairman of the Joint Chiefs of Staff Gen. Martin Dempsey, the nation’s top military officer, appeared caught off-guard. The Pentagon has in recent days sought to strike a balance between words of warning to the North and attempts to calm the situation. General Dempsey's reaction suggested that he was not pleased to have the DIA assessment made public, as it could further stoke anxieties over what is already a enormously tense international standoff.

Representative Lamborn read from the report toward the end of a defense budget hearing. “They say, ‘DIA assess with moderate confidence the North currently has nuclear weapons capable of delivery by ballistic missiles. However, the reliability will be low.’ General, would you agree with that assessment by DIA?” he asked…

Only a day ago, Dempsey told reporters during a Pentagon briefing that “the proximity of the North Koreans to achieving a miniaturization of a nuclear device on a ballistic missile … is a classified matter.”

Allison Sherry of the Denver Post reported Thursday afternoon that Rep. Doug Lamborn claims to have "gleaned" the information from a classified report, but the specific sentence quoted by Lamborn while questioning Gen. Martin Dempsey was not classified. However, CNN says, according to Sherry, that the report was mistakenly marked "unclassified," which implies it was secret information. That would explain Gen. Dempsey's reaction when publicly confronted with it by Rep. Lamborn.

Now to be clear, none of this changes any realistic assessment of North Korea's military capabilities. They can't even put one missile on a launch pad without the international community knowing about it, and our recently-developed missile defense systems have been designed with a threat like this in mind. North Korea has no proven ability to project any more than a regional threat, and beyond lobbing a few missiles we can shoot down, they are really only a threat to South Korea and American military based there. Immediately after the hearing in which Lamborn disclosed this information, the New York Times reported:

[L]ate Thursday, the director of national intelligence, James R. Clapper Jr., released a statement saying that the assessment did not represent a consensus of the nation’s intelligence community and that “North Korea has not yet demonstrated the full range of capabilities necessary for a nuclear armed missile.”

In another sign of the administration’s deep concern over the release of the assessment, [Pols emphasis] the Pentagon press secretary, George Little, issued a statement that sought to qualify the conclusion from the Defense Intelligence Agency, which has primary responsibility for monitoring the missile capabilities of adversary nations but which a decade ago was among those that argued most vociferously — and incorrectly — that Iraq had nuclear weapons.

“It would be inaccurate to suggest that the North Korean regime has fully tested, developed or demonstrated the kinds of nuclear capabilities referenced in the passage,” Mr. Little said.

Bottom line: the State Department is working hard to calm tensions on the Korean peninsula. North Korea is in a desperate economic situation, barely functioning as a society two decades after the fall of the Soviet-backed multinational economic system. Perpetually unable to feed its population, North Korea relies on foreign aid for sustenance and basic commodities like oil needed to sustain any war effort. The recent threats by the North, like declaring the armistice that ended the Korean War no longer valid, could be a simple escalation of the empty bluster they have always employed–or it could be a symptom of that regime's death throes. Either way, last year's Red Dawn remake has zero actual chance of ever coming true. We really hope everybody understands this.

That said, we do see a possible unfortunate convergence between Lamborn's probably not-very responsible disclosure of this assessment, and the story today about the North Korean media's amusingly bad mapreading skills in threatening to attack Colorado Springs–particularly among "low-information" consumers of conservative online media. Also, we can't help but think a Democrat in this situation would be getting skewered by the right for "divulging secrets." Setting that latter point aside, we stand by our previous conclusion that it's not yet time to dig bomb shelters in Front Range back yards. If you can't help yourself, at least call before you dig.

And if there's a, you know, different security clearance for Lamborn that lets him do his job of unquestioningly supporting the interests of defense contractors on the Armed Services Committee without slobbering all over classified information, that might be good too.