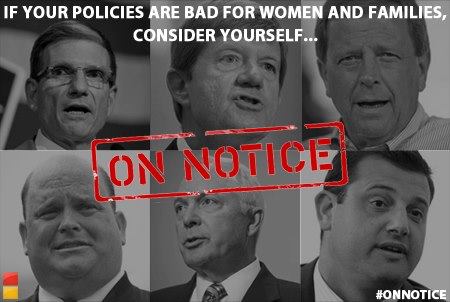 Colorado Rep. Scott Tipton has earned a spot on the EMILY's List roster of "On Notice" Republican lawmakers. Criteria being:

Republicans "On Notice" meet two special criteria. First, they've amassed appallingly anti-woman, anti-family records. And second, there is major Democratic female talent waiting in the wings. [Pols emphasis] Help us get the word out that the EMILY's List community is ready to send these guys packing!

“Representatives Heck, Kline, Latham, Reed, Tipton, and Valadao have a record – in some cases years long – of voting for some of the most shocking anti-woman legislation in the country,” said Stephanie Schriock, President of EMILY’s List. “Each one of them has proven there’s no limit to how far they’ll go to roll back the clock. Whether they opposed equal pay, voted to end Medicare as we know it, or to allow hospitals to let women die rather than provide lifesaving abortion care, it’s clear they have the wrong priorities. These extremists are doubling down on the same failed policies that led women voters to reject the GOP agenda during the last election, and threatening the health and safety of our nation’s families in the process. They’re wrong for women and families plain and simple, and the EMILY’s List community is ready to send them packing.”

EMILY's List is the foremost political action committee devoted to electing Democratic women to office. Certainly Rep. Tipton can't be considered friendly to the slate of issues EMILY's List organizes around, but this is the strongest indication yet that support is building for a run by Democratic state Sen. Gail Schwartz next year.