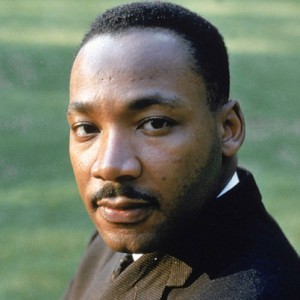 April 4th, 2013 is the 45th anniversary of the assassination of Dr. Martin Luther King, Jr.

UPDATE: We just received this statement from Rosemary Harris Lytle, President of the NAACP-Colorado-Montana-Wyoming State Conference:

This is a day the NAACP and others around the world observe as a day of peace, a day of remembrance, a day of dedication to non-violence–the anniversary of Dr. King's assassination. Like too many of our greatest leaders, Dr. King was killed by a gun; a high-powered weapon. We mourn the moment 45 years ago when he was felled on that balcony. We rededicate ourselves in his honor to ending gun violence and promoting gun control. Shame on the El Paso County Commission for using the anniversary of his death as a political opportunity instead of an opportunity to end the plague of gun deaths and gun injustice in this state and country.

Hundreds of union members and their supporters marched in Memphis on the 45th anniversary of Martin Luther King Jr.'s murder, calling for a new commitment to the human rights causes he died for.

With the march and a dedication ceremony Thursday, they honored King and the sanitation workers strike that brought him to Memphis, where he was assassinated in 1968.

In a light drizzle, more than 1,000 marchers wore T-shirts with union logos and held signs saying "We are Memphis" or bearing the slogan for the 1968 strike: "I am a man." Participants came from as far as Louisiana, California and New York.

Around the country today, there have been tributes to the late civil rights leader Martin Luther King, Jr., who was assassinated 45 years ago today in Memphis, Tennessee. While Dr. King's birthday each January is commemorated as a national holiday, April 4th, especially among civil rights activists and students of this period of American history, is a day with equally profound significance.

But not in arch-conservative El Paso County, Colorado, where a different commemoration was observed today.

WHEREAS, volunteers across America have formed local Friends of NRA committees to raise funds for the non-profit NRA Foundation; and

WHEREAS, these funds are used to support such important programs as firearms education and safety, shooting range development, conservation education and research, the shooting sports, law enforcement firearm competition, and many other vital programs; and

WHEREAS, last year Colorado Friends of NRA committees raised more than $585,000 through the support of their communities; half of which stays in Colorado; and

WHEREAS, last year the Colorado Friends of NRA State Fund Committee provided more than 56 grants totaling over $290,000 to Colorado organizations; and

WHEREAS, the Colorado Springs Friends of NRA Committee is celebrating its 18h anniversary of service to our community; and

WHEREAS, the Colorado Springs Friends of NRA Committee will hold its annual event on April 4, 2013; and

WHEREAS, that the Board of County Commissioners of El Paso County, Colorado hereby designates April 4, 2013 as “Friends of NRA Day.”

NOW, THEREFORE, BE IT RESOLVED that the Board of County Commissioners of El Paso County, Colorado hereby designates April 4, 2013 as “Friends of NRA Day.”

DONE THIS 4th day of April 2013, at Colorado Springs, Colorado. THE BOARD OF COUNTY COMMISSIONERS OF EL PASO COUNTY, COLORADO 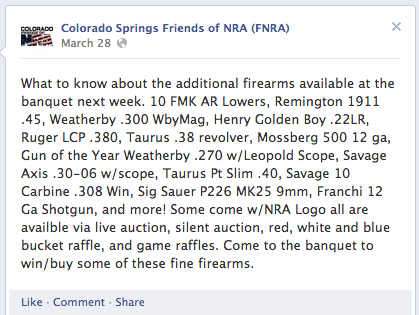 Now folks, it should be noted that tonight is the night of the Friends of the NRA's annual fundraiser dinner, which is what prompted the El Paso County commissioners to approve this resolution designating today "Friends of NRA Day." At tonight's NRA fundraiser auction, a number of guns will be available, including (see right) a .30-06 bolt action rifle.

And again, we can't ascribe anything more than coincidence to the fact that Martin Luther King was killed by a .30-06 rifle.

We have no doubt that the El Paso County Commission will claim ignorance of today's significance, and we have to allow for the possibility that they were not aware they were declaring the 45th anniversary of MLK's death "Friends of NRA Day." And even if they were aware, it's entirely possible that they would not consider it to be a problem.

Despite all the excuses we can ourselves imagine here, we can't shake the idea that this is an embarrassing development for Colorado's foremost conservative stronghold.