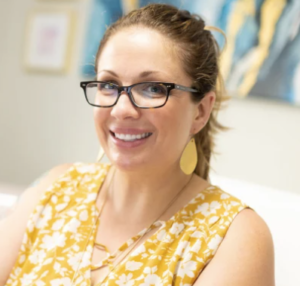 Lorie Smith, who is just petrified that she might be asked to make a gay website someday.

AP reports via the Colorado Sun on a local case being heard by the U.S. Supreme Court today, a Highlands Ranch woman who believes her rights are being violated by Colorado law preventing her from posting publicly that she won’t make websites for LGBT couples:

The Supreme Court is hearing the case Monday of a Christian graphic artist who objects to designing wedding websites for gay couples, a dispute that’s the latest clash of religion and gay rights to land at the highest court.

The designer and her supporters say that ruling against her would force artists — from painters and photographers to writers and musicians — to do work that is against their faith. Her opponents, meanwhile, say that if she wins, a range of businesses will be able to discriminate, refusing to serve Black customers, Jewish or Muslim people, interracial or interfaith couples or immigrants, among others.

Most readers are familiar with the earlier case of cake baker Jack Phillips, who refused to produce a wedding cake for a gay couple leading to a discrimination complaint under Colorado law that was tossed at the U.S. Supreme Court in a narrow ruling that did not address the underlying question in the case of whether a cake bakery is public accommodation or artistry. As we discussed back in February and Westword’s Michael Roberts reported again today, web designer Lorie Smith’s case is quite a bit different:

The ADF characterizes it as a “pre-enforcement challenge” against the Colorado Anti-Discrimination Act (CADA), which “prohibits creative professionals from expressing any views about marriage that could indicate someone is ‘unwelcome, objectionable, unacceptable, or undesirable’ because of their sexual orientation or that suggests that the designer won’t create particular expressive works because of those beliefs.” The ADF claims that CADA prevents Smith from explaining online that she won’t “create websites and graphics celebrating same-sex weddings” because they “violate her conscience. Lorie’s faith teaches her that marriage is between one man and one woman.”

…The defendants in the case, including Colorado Civil Rights Commission head Aubrey Elenis and its other members, as well as Colorado Attorney General Phil Weiser, were granted summary judgment in September 2019, largely because the case was hypothetical: Smith filed suit before posting any statement, and no state body had punished her. The unstated subtext: The ADF wanted to pick a fight, and the court wasn’t interested in participating.

Unlike the Phillips case in which a party was actually denied services, Lorie Smith’s complaint is not due to anyone actually requesting she make an LGBT wedding website. A look at Smith’s client portfolio page shows Smith has created a range of modest websites for small businesses and local Republican candidates like Reps. Kevin Wan Winkle and Kim Ransom. At the going rate for website development, there doesn’t appear to be enough work in this portfolio to suggest Smith is making a full-time living on web design.

And that’s when it hits you: Lorie Smith is serving as the vehicle for the Alliance for Defending Freedom’s “pre-enforcement challenge” to Colorado discrimination law at least in part for personal financial gain. Smith’s religious principles have not been violated, because no one ever asked her to do the thing she claims would violate them. This whole case boils down to Smith wanting to display a disclaimer on her website that she won’t make wedding sites for LGBT couples, presumably so she is never faced with the trauma of discriminating to an LGBT couple’s face.

The realization that Smith is willfully participating in a contrived legal assault on Colorado’s anti-discrimination law instead of responding to any actual dilemma confronting her small business makes it much more difficult to sympathize with her, and invites hard questions about Smith’s real motivations. ADF could have waited for an actual case to emerge, but instead they found an unscrupulous small business willing to play a hypothetical victim. The reward, or a least a very lucrative perk, is more free advertising than Lorie Smith’s website business was ever worth.

Will the 6-3 conservative-skewed Supreme Court care about the ulterior motives at work? Probably not.

But we can’t stand by and just watch this flim-flam unfold without pointing out the obvious.