At Least He’s Not Your Loser Senate Candidate 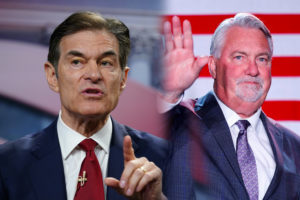 “I can’t imagine ‘The Dr. Oz Show’ being rebooted at this point,” Robert Thompson, professor of television and popular culture at Syracuse University, told The Wrap on Monday.

The tabloid RadarOnline quoted an unnamed insider who said Oz is now being confronted with the stark reality of having entered politics, which inherently makes him more of a divisive figure than he was previously.

“He can’t even get a word with his former producers,” the unnamed source said. “Dr. Oz is a social creature who likes to hear himself talk, and it’s beginning to dawn on him that he’s just not wanted in Hollywood circles anymore.”

In Dr. Oz’s case, the problem may not solely be political baggage. We’re not sure if Oz was ever what you’d call a credible source of medical knowledge, but in the last few years his show witnessed a descent into wholesale quackery that punched large holes in Oz’s credibility even before he became Donald Trump’s anointed candidate to run for the Senate in Pennsylvania. It’s a much greater problem than for example Colorado’s U.S. Senate loser Joe O’Dea faces, since Democrats will still need O’Dea to pour concrete on the public projects that always made up the bulk of O’Dea’s business.

But in the same way we can’t imagine Heidi Ganahl’s motivational slogan business having the same appeal after Ganahl’s disastrous campaign spent courting Colorado’s hateful political fringe, it will be even harder for at least half the country to believe anything Dr. Oz says now. It’s probably time for Oz to hang up broadcast TV and join the conservative speaking tour circuit, which won’t be as lucrative as Oz’s Oprah-blessed former career.

It’s reasonable to speculate that O’Dea regrets running. Before the end, Dr. Oz may regret it much more.