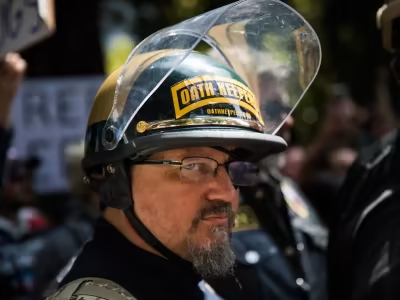 As the Washington Post reports, a verdict today in one of the highest profile criminal trials (so far) of a major player in the January 6th, 2021 insurrection at the U.S. Capitol to obstruct the certification of Joe Biden’s presidential victory. Stewart Rhodes, founder of the “Oath Keepers” militia group that claims a large number of members in Colorado–not Colorado GOP chair Kristi Burton Brown’s old militia group, the other one–is guilty of the fairly extraordinary crime of seditious conspiracy.

A federal jury on Tuesday convicted Oath Keepers founder Stewart Rhodes of seditious conspiracy for leading a months-long plot to unleash political violence to prevent the inauguration of President Biden, culminating in the Jan. 6, 2021, attack on the Capitol.

The verdict in Rhodes’s case likely will be taken as a bellwether for two remaining Jan. 6 seditious conspiracy trials set for December against five other Oath Keepers and leaders of the Proud Boys, including the longtime chairman Henry ‘Enrique’ Tarrio. Both Rhodes and Tarrio are highly visible leaders of the alt-right or far-right anti-government movements, and were highlighted at hearings probing the attack earlier this year by the House Jan. 6 committee. 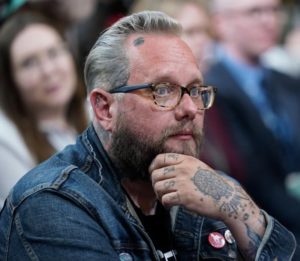 Back in September, the Denver Post’s Seth Klamann reported on leaked membership rolls for the Oath Keepers that showed almost 1,000 members of the militia organization in Colorado alone–although a number of individuals on that membership list claimed they were not active members or had withdrawn from the group after negative press earned at the Bundy Ranch standoff. In July, hirsute Colorado resident Jason Van Tatenhove testified before the January 6th Select Committee as Colorado Public Radio reported:

Van Tatenhove, who lives in Estes Park, did not mince words when talking about the right-wing extremist group he worked as a spokesperson for until 2016. “In my opinion, the Oath Keepers are a very dangerous organization.”

“I can tell you that they may not like to call themselves a militia, but they are. They’re a violent militia,” he said, noting the group started becoming radicalized during his time there. “I think the best illustration for what the Oath Keepers are happened January 6th, when we saw that stacked military formation going up the stairs of our Capitol.”

Rhodes may be the highest up the Trumpian food chain to be found guilty of a major crime in the plot to overturn the 2020 presidential election, but Rhodes’ guilt in turn points to the guilt of plotters well above his level–including close associates of Trump who Rhodes was in regular contact with. The criminal charges must not stop with Stewart Rhodes. The conspiracy Rhodes was found guilty of participating in goes right to the top.

That’s the justice the country needs before we can move on from January 6th.