I get these ballots waiting to be cured are important. Aggressively pursuing Voters, being rude, and calling relatives. Voters have the right to cure their ballot; they also have the right to not cure. One young voter told me she will never vote again. @annalynnfrey @johnmrod 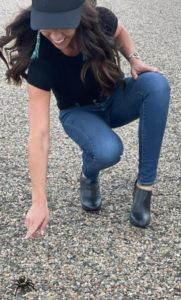 Lauren Boebert checking to see if this tarantula cured its ballot.

As Denver7’s Colette Bordelon reports, in the rush to “cure” ballots by close of business today in Colorado’s unexpectedly close CD-3 race between Democrat Adam Frisch and Republican incumbent freshman locus of outrage Lauren Boebert, voters who had a temporarily disqualifying error on their ballot, usually unsigned or an issue with their signature not matching official records, have become the subject of a nationwide campaign to “encourage” them fix the problem and have their vote counted. And like anyone who finds themselves suddenly on the receiving end of large numbers of text messages, phone calls, and door knocks from salesman, missionaries, and/or political campaigns, it’s certainly a jarring experience:

In Pueblo County, some campaigns are annoying their constituents by aggressively pursuing voters who need to cure their ballot. Tactics include calling, texting, reaching out to relatives, and in a few instances, showing up at voter’s homes…

Ortiz said there were 725 Pueblo voters who needed to fix signature discrepancies. At last check, he said around 300 ballots still needed to be cured.

So first of all, it needs to be restated that only a tiny fraction of voters are being contacted by the campaigns about problems that prevented their ballot from being counted. “A lot of complaints” can’t add up to more than the number of problematic ballots, and voters who are upset about being contacted can rest easy in the knowledge that races are rarely close enough to provoke this kind of attention–and correcting signature issues on a ballot helps prevent the problem from happening the next election.

Having gone through all the trouble of completing and returning a mail ballot, it’s hard for us to imagine anyone not wanting to ensure their ballot counts–especially in this extremely close congressional race that could decide the majority in Congress. Just like with voting by mail, the best way to make the phone calls and text messages chasing your ballot stop is to deal with the issue as quickly as possible.

With all of that said, it’s possible that campaigns employing “crowdsourcing” techniques to direct volunteers en masse at this small pool of voters is an excessively brute-force strategy, and that could be a useful subject of study in the aftermath. All we can say today is, neither campaign wants to lose this race due to any action they could have in retrospect taken.

There’s a hard limit to all of this, just a few hours away.