The Sad Final Days of the Top of the GOP Ticket 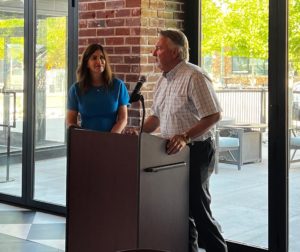 You can count the number of days until the end of the 2022 election cycle on one hand. As Election Day looms, Republican Senate candidate Joe O’Dea and GOP gubernatorial no-hopeful Heidi Ganahl are caught in a weird illogical loop of desperation and internal lies.

Before we update you on the strange last days of each campaign, it’s important to keep this in mind: The last two public polls in each race have shown both O’Dea and Ganahl losing by YUGE margins. On Wednesday, the University of Colorado’s American Politics Research Lab released polling data showing Democrat Michael Bennet leading O’Dea by 12 points and Democrat Jared Polis running ahead of Ganahl by 16. These numbers come on the heels of a poll from Global Strategy Group indicating an 11-point advantage for Bennet and an 18-point lead for Polis.

You could argue about methodologies and polling mechanics until you are purple in the face — and it’s more likely than not that both of these races end up being somewhat tighter after the actual votes are counted — but it’s pretty unlikely that these two recent polls are completely wrong. The question for O’Dea and Ganahl, then, is not if they can win on Tuesday, but if they can avoid being completely annihilated.

With that in mind, here’s what O’Dea and Ganahl have been doing in the last few days aside from avoiding populated areas of Colorado…

O’Dea put another $1 million of his own money into his campaign on Monday, upping his total personal commitment to more than $4.2 million. Ganahl wrote her campaign another big check last month and has now committed about $2 million of her own money ($1.4 million in loans and $600,000 in contributions).

O’Dea’s $1 million contribution on Monday is an egregious example of a candidate getting positively robbed by his own consultants. By every public metric, the Colorado Senate race is not close enough that a $1 million contribution in the last week will make much of a difference. O’Dea’s previous personal contributions are certainly excusable but are a sunk cost at this point; writing your campaign another $1 million check in the final week is the very definition of good money chasing bad. Any respectable campaign consultant should have told O’Dea that this late contribution was too little, too late.

Running to the Right

Ganahl didn’t really try to moderate her positions after the Primary Election. O’Dea did make that attempt — poorly — but in recent weeks he’s become much more of a right-wing nutter. For example, O’Dea followed up his nightmare interview with Jake Tapper of CNN on Tuesday by talking gibberish on MSNBC, calling Democrat Hillary Clinton the original “election denier.”

asked on MSNBC if he’s comfortable with election deniers in his party, Joe O’Dea brings up … Hillary Clinton. pic.twitter.com/2EIorS97Pc

There are a lot of Colorado Republicans who wouldn’t blink at making this claim, but O’Dea was supposedly different. O’Dea claimed to be a less-insane Republican who was “not a politician,” but you know who else says insane shit like this? Right-wing Republican politicians.

Ganahl, meanwhile, sent out this message in an email late Wednesday: 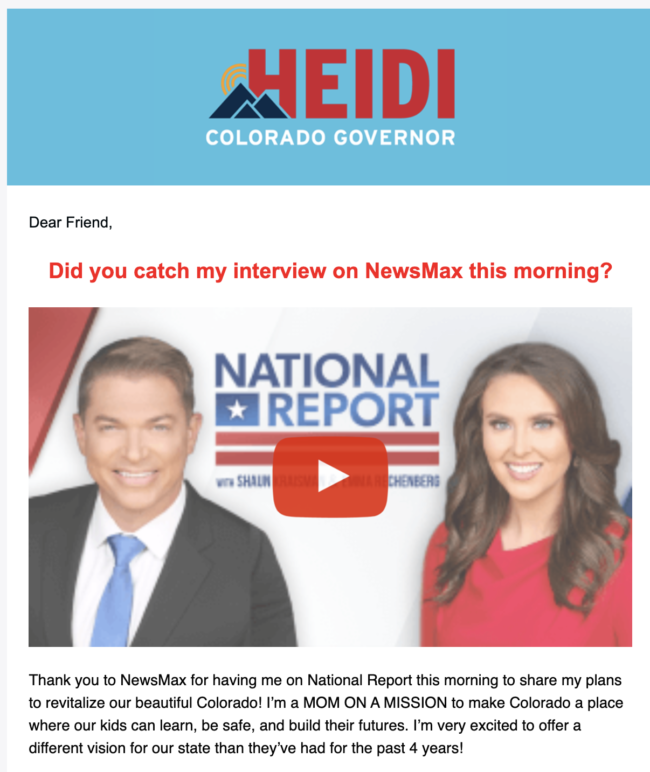 We feel more than comfortable saying that the ONLY people who would be excited to know that Ganahl was talking to freaking NewsMax are right-wing Republicans who were already committed to supporting her campaign. There’s a better than even chance that Ganahl is interviewed by Alex Jones before Tuesday.

It’s bad enough that Ganahl took the time to talk to NewsMax, but it’s insane that she sent out an email crowing about her appearance. Is it possible that Ganahl thinks she is running to be Governor of Alabama?

Whoever thought this was a good idea apparently also convinced O’Dea. The Republican Senate candidate made his own inexplicable appearance on NewsMax today. Again, if these candidates are worried about their base heading into the final days of the election, then they’re royally screwed.

Supporters of both Ganahl and O’Dea have been spending a lot of time this week trying really hard to downplay the anti-choice positions of their candidates…and then getting punched in the teeth immediately afterward:

Hi Krista. Here’s the video of Ganahl pledging to rip up Colorado’s RHEA, which establishes a “right to use or refuse contraception” and that every pregnant person has a “right to continue the pregnancy and give birth or to have an abortion” https://t.co/29gpukAT4o

O’Dea supporters have been attempting the same switcheroo, with the same basic results.

Cool story, Ross. Joe O’Dea voted for and signed a petition to ban abortion in Colorado with no exceptions. He knew he did that and hoped no one would notice. The dishonesty is all his. #copolitics

If you’re wondering why Ganahl and O’Dea are trying to reassure their base at the same time that supporters are working to make them look less-extreme…well, so are we.

They’re not laughing WITH you.

Lede of the year candidate for me:

“For decades, Joe O’Dea poured his beer over ice in peace. Then he ran for the U.S. Senate.”https://t.co/6U1p8cLkaW via @kristinapet #copolitics #cosen

National media outlets are also finally starting to realize that the “O’Dea Surprise” is more like a weird casserole than a tasty treat. As Jim Newell reports for Slate:

“So are you doing the ‘this race is going to be closer than you think’ story too?” A Colorado politics reporter asked me my first night in Denver.

I was not the first national reporter to do a “fly-in” from D.C. to see Mitch McConnell’s “perfect candidate.” We were becoming tiresome. Perhaps all the more so because Bennet had been maintaining a roughly 10-point advantage on O’Dea in polling averages. Sometimes they’re “sleeper races” for a reason. (“I’m doing something post-that,” I said, stupidly.).

As we’ve written before in this space, all of the other national stories about Colorado’s Senate race had followed the same pattern of asking if Bennet could be in trouble and then coming to the conclusion that Bennet is not in trouble. Newell, at least, skips to the end:

Being the “perfect candidate” in a long-shot state sounds exhausting. Had Colorado Republicans nominated the nearest available warm body, they would not have had any expectations of possibly winning, and the warm body would have coasted freely to an unremarked-upon 15-point loss. O’Dea, though, built up hopes among Republicans and fears among Democrats. Barring some wild change in polling, he could be walking on eggshells to a much remarked-upon 5- to 10-point loss. (For all of McConnell’s talk about how he would be “all-in” on the state, his aligned super PAC, the Senate Leadership Fund, only kicked in a perfunctory $1.25 million in mid-October.)

As for Ganahl, she’s finding out that her “Mad Mom on a Meme Mission” nonsense is not resonating with, well, actual moms.

Via The American Politics Research Lab at the University of Colorado.

The Ganahl and O’Dea campaigns have been two of the strangest statewide efforts that we have seen in Colorado in a long time. Perhaps we should give them some credit for keeping it weird until the bitter end…

But really, we’re just ready for them both to go away.