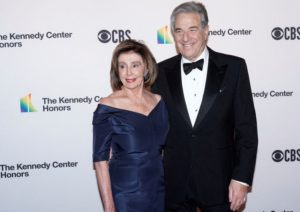 Speaker of the House Nancy Pelosi and her husband Paul.

We’re monitoring terrible news out of San Francisco today that appears to be getting worse by the minute, as Politico reports on the violent attack early this morning on Paul Pelosi, husband of Speaker of the House Nancy Pelosi:

The intruder who allegedly assaulted Nancy Pelosi’s husband in the couple’s San Francisco home early Friday morning was searching for the House speaker, according to a source briefed on the attack.

The assailant broke into the Pelosi residence shouting “where is Nancy, where is Nancy?” before violently assaulting Paul Pelosi, according to the source. [Pols emphasis]

A spokesperson for Nancy Pelosi announced the attack in a statement Friday morning, confirming that the alleged assailant is in custody, and the motivation for the attack is under investigation. The speaker was not in San Francisco at the time of the attack and Paul Pelosi, 82, was taken to the hospital and is expected to make a full recovery, the spokesperson said.

Information is slowly coming out on the suspect, further confirming the apparent motive:

Paul Pelosi was described initially as “expected to make a full recovery,” but the latest reports suggest he is undergoing brain surgery after the assault. Watch this space for updates and statements from local officials as they come in. Local media has documented the rise in recent threats of violence against public officials as the midterm elections approach, in particular Democratic officials and especially women Democratic officials, including a man sentenced to federal prison this year for threatening Colorado Secretary of State Jena Griswold. The years-long campaign of deeply personal right-wing vitriol against Speaker Pelosi is more intense due to her high-ranking position, but it’s the same motivation.

There’s no analogue on the left for this behavior, and we have to stop pretending there is.