One Year of Running in Circles

The editorial board of The Denver Post formally backed incumbent Democratic Gov. Jared Polis on Sunday, joining every serious newspaper in Colorado that plans to make endorsements for public office in 2022.

We’d guess that supporting Polis was not a particularly difficult decision for the Post editorial board given the persistent lunacy of Republican gubernatorial nominee Heidi Ganahl. You could no more craft a logical endorsement of Ganahl than you could advocate for replacing your car tires with giant wheels of cheese. It is nevertheless instructive to look at what the Post had to say because of three critical paragraphs at the very end of the endorsement:

Ganahl is asking voters to look past the current Republican realities. While presenting herself as a law-and-order supporter, Ganahl has linked herself too closely to a fringe Republican movement — led by former President Donald Trump — aiming to undermine America’s democracy and turn Americans against one another with outrageous claims that a vast conspiracy of Democratic Party operatives have rigged our elections.

Ganahl did not want to talk about the issue when asked if she was concerned about Trump’s actions.

“I’m concerned about a media that is completely biased and out of control … I know who you are going to endorse, so we don’t have to complete the conversation if this is how it’s going to go,” Ganahl said. “Danny (Moore) and I have both said loud and clear that Biden is the president, the media just doesn’t want to cover it, and we are focused on beating Jared Polis.” [Pols emphasis]

If you have been following the 2022 race for Governor in Colorado, this will all sound very familiar. Ganahl is ending her gubernatorial campaign in basically the exact same place she began. 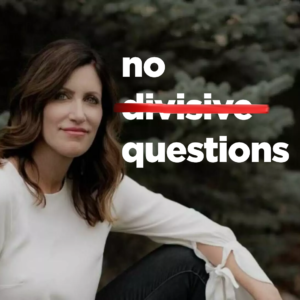 When Ganahl formally launched her bid for Governor in September 2021, she talked with a group of reporters and immediately set the precedent for a combative relationship with Colorado media outlets based on her non-answer to one simple question: Do you think there was fraud in the 2020 election?

This was, and remains, an important topic for any 2022 candidate — particularly a candidate for statewide office. It is no small thing to acknowledge that you believe in the system of democracy in which you are seeking to take part. Ganahl whiffed on the question when asked by multiple reporters (including The Denver Post). She followed that up with a disastrous interview with Marshall Zelinger of 9News in which she tried (and failed) to change the subject.

Weirdly exasperated by the same question she had already failed to answer, Ganahl responded: “Why all the divisive questions?”

When Zelinger did not just allow Ganahl to change the subject, she followed up with this:

“Oh my goodness, Marshall. Let’s talk about what’s important to the people of Colorado. And that’s kids, it’s skyrocketing crime. I just said that kids are killing themselves at record rates and we want to talk about other things that aren’t that important to many people.”

Sitting down with the editorial board of The Denver Post one year later, Ganahl seems to be utterly incapable of understanding that the reason people keep asking her this question IS BECAUSE SHE NEVER PROVIDES AN ANSWER.

This is not rocket surgery. If you don’t answer a question, you can bet that journalists will keep asking — particularly when you simultaneously select a noted election denier as your running mate.

Ganahl and her Lieutenant Governor choice, Danny Moore, now say that “Joe Biden is the President,” which is not an answer to a question about election fraud. Ganahl won’t elaborate on this no matter how many times she is asked. The only logical conclusion to make amid this defiance is that Ganahl truly believes in Donald Trump’s “Big Lie” that the 2020 election was stolen from him.

This is strange, because surely Ganahl had to understand that being a full-fledged election denier would make her unelectable in Colorado. The alternative is even weirder: If Ganahl actually does NOT believe in the “Big Lie,” then she flushed her credibility down the toilet for no reason at all.

Whatever the answer, the end result is the same. This entire campaign was a complete waste of time for Ganahl and every one of her supporters. When you’re running in circles, you always end up right back where you started.