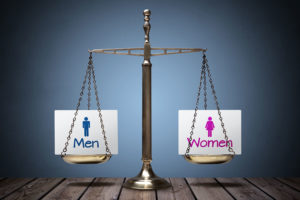 In 2019, the Colorado General Assembly’s Democratic majority passed the Equal Pay For Equal Work Act, Senate Bill 19-085, which required among other provisions for Colorado employers to post the salary range for available positions in job postings. Transparency in salary range is considered a vital component to reducing gender-based wage inequity.

The bill passed over the strained objections of the Republican minority, as the Denver Post’s Justin Wingerter reported at the time:

“It’s not so much of a woman thing,” said Rep. Perry Buck, a Windsor Republican and opponent of the bill, during House debate Friday. “I don’t believe in the women as being victims. [Pols emphasis] You look at how many are graduating with degrees. Women are on a movement and look at the legislature. There is absolutely, definitely equal pay here.”

Buck and business groups say they fear frivolous lawsuits will increase, costing companies even when they’ve done nothing wrong. The National Federation of Independent Business opposed the bill, saying most Colorado small businesses don’t have a legal department and could be bankrupted by a lawsuit. Plus, it says, salary history is a necessary tool for determining qualified applicants.

Republican amendments would have allowed companies to be reimbursed legal fees by an employee whose discrimination claim was found to be baseless and allowed for voluntary disclosure of salary history, but those amendments failed in the Senate Judiciary Committee.

After the Equal Pay For Equal Work Act took effect in January of 2021, the same Republicans who opposed the bill in 2019 were (no nice way to say this) inappropriately overjoyed when some employers began excluding Colorado applicants for remote work in job listings in retaliation for Colorado’s requirement that salary ranges be posted in job listings. Conservative outlets like Reason rejoiced that the “Equal Pay Law in Colorado is backfiring.”

A new employee compensation bill in Colorado was supposed to help close gender gaps in worker pay. But the so-called Equal Pay for Equal Work Act could be making it harder for Colorado residents—regardless of gender—to find jobs…

Understandably, some employers who can help it are opting out.

“This is a remote job except that it is not eligible to be performed in Colorado,” says an Airbnb listing for an accounting manager.

“This work is to be performed entirely outside of Colorado,” says an Ally Financial posting about a developer position.

But then a funny thing happened–although the number of position postings for Colorado jobs dropped, as CNBC reports, our state’s labor participation rate actually went up:

Two notable things happened in the first year after the law went into effect, research author Sam Kuhn tells CNBC Make It: First, daily job postings on Indeed fell by 8.2% in Colorado compared with neighboring Utah (which was chosen as a control for having similar demographics and economic characteristics).

The drop in Colorado jobs corresponds with reports that companies were actively barring workers in the state from applying to some remote jobs, or were taking the work elsewhere, in order to avoid the posting requirement.

Second, data shows there was a 1.5% increase in Colorado’s labor force participation rate relative to Utah’s.

By June of this year, as the Colorado Sun’s Tamara Chaung reported, the entire debate over salary transparency had shifted thanks in no small part to Colorado’s visionary and much-maligned new law breaking open the discussion:

“With the way that Colorado drafted the Equal Pay for Equal Work Act, they were on the forefront as it related to what is called the transparency part of the law, the posting requirements,” [labor attorney Beth Ann] Lennon said. “Lots of states are following suit.”

Other states, such as California, had equal-pay laws, but Colorado’s is considered the most aggressive because of the requirement to post salaries publicly, [Pols emphasis] according to the Society for Human Resource Management. Other states left it up to job applicants to request salaries so the information was not widely known. But even California is now working on revamping its law.

“Colorado’s law really kicked off a conversation amongst employers,” said Andrea Johnson, director of state policy and work initiatives at the National Women’s Law Center. “And a few years later, now we have a different labor market, a tighter labor market where employers are starting to provide value ranges voluntarily even if they aren’t in a state with a law because they know it helps attract candidates.”

The new law will require nearly 200,000 California companies with 15 or more employees to disclose pay starting next year.

It’ll be the largest state where job-applicant pay information will be mandated by law.

California’s adoption of salary transparency in job postings will go a long way toward normalizing the practice, simply due to the huge number of people in the nation’s largest state economy who will benefit. Instead of Colorado’s bold move against wage inequity being undone by large corporations punitively boycotting Colorado jobseekers, the rest of the country is aligning itself with the example set by Colorado Democrats in 2019.

If that’s not a bankable political win, we’d be hard-pressed to tell you what is.