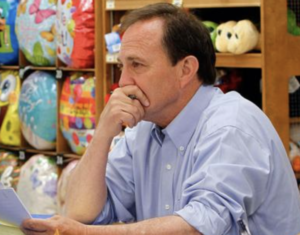 Democrat Ed Perlmutter, who is retiring this year after serving eight terms in Congress representing Jefferson County, will hold his final “Government in the Grocery” event on Saturday.

Via a press release from Perlmutter’s office:

…While the average attendance ranges from 20 to 30 people, some Government in the Grocery events have seen upward of 200 people. For example, in 2009 during the Affordable Care Act debate and in 2017 after President Trump first took office. Over the years, Perlmutter has met with hundreds of constituents during these informal meetings on topics ranging from jobs, mortgage issues, the economy, Veteran issues, national budget, national security, Medicare, debt, education, medical research, health care, human rights, animal rights, war and many others. Ideas for legislation, support for legislation, constituent assistance and more have resulted from these meetings.

Perlmutter’s “Government in the Grocery” events were an ideal symbol of a Congressman who never forgot the importance of being available to his constituents. Perlmutter first started holding his grocery store meetings in 2007, and continued them throughout his tenure in Congress (pausing only after Arizona Rep. Gabby Giffords was seriously wounded in a shooting at a grocery store in January 2011).

Perlmutter’s final grocery store event will be held on Saturday at the Safeway store on 9160 W. Colfax Avenue in Lakewood from 10:00 am – Noon.