With a hat tip to Lynn Bartels of the Denver paper, here is the mailer attacking SD-8 incumbent Republican Sen. Jean White, in a tough primary battle against fellow Republican Rep. Randy Baumgardner–we were also forwarded a copy of these yesterday. Hide your eyes, Junior: 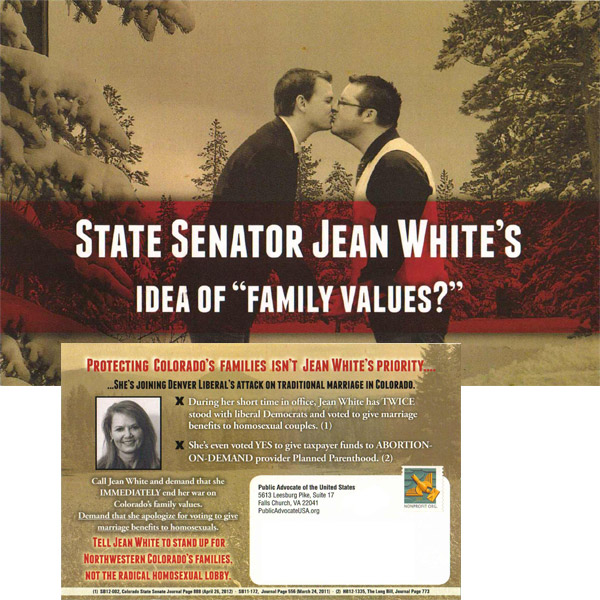 As Bartels reports, this is primarily an attack on Sen. White’s support this year, as well as during last year’s legislative session, for civil unions legislation–with the visual of two men kissing intended to viscerally shock conservative SD-8 primary voters. The fact is, some of those conservatives will probably object more to this “suggestive” material appearing in their mailbox at all, since Sen. White’s position on civil unions is hardly a secret. So there’s that.

But what’s particularly interesting in this mailer is the second accusation, that Sen. White voted “yes to give taxpayer funds to abortion-on-demand provider Planned Parenthood.” This basis for this claim, noted at the bottom of the mailer, is

That is, the same Long Bill budget that Rep. Randy Baumgardner, and every member of the GOP-controlled Colorado House except Rep. Chris Holbert voted for! The same budget House Republicans are trumpeting as their shining 2012 achievement! That takes chutzpah, folks.

But before we get all factual, note that the intended audience won’t read past the guys kissing.