State Senator Kevin Priola of Henderson shook up the Colorado political world on Monday by announcing that he was switching parties and becoming a Democrat because he could no longer abide a Republican Party that opposed any efforts to combat Climate Change and refused to speak out against the Jan. 6 insurrection and the “Big Lie” propagated by former President Donald Trump.

Priola’s announcement was a surprise to many, but it actually makes a lot of sense with the benefit of hindsight. Republicans have always treated Priola with open contempt for his willingness to believe in things that weren’t spoon-fed to him by right-wing interest groups and MAGAbots. Republicans had no love for Priola — calling him the “Californian of the Year,” among other slights — despite the fact that he almost singlehandedly gave the GOP a majority in the State Senate with his SD-25 victory in 2016.

If Priola had any doubt about whether he was making the right decision, former militia leader and current State Republican Party Chairperson Kristi Burton Brown provided plenty of unintentional reassurance on Monday: 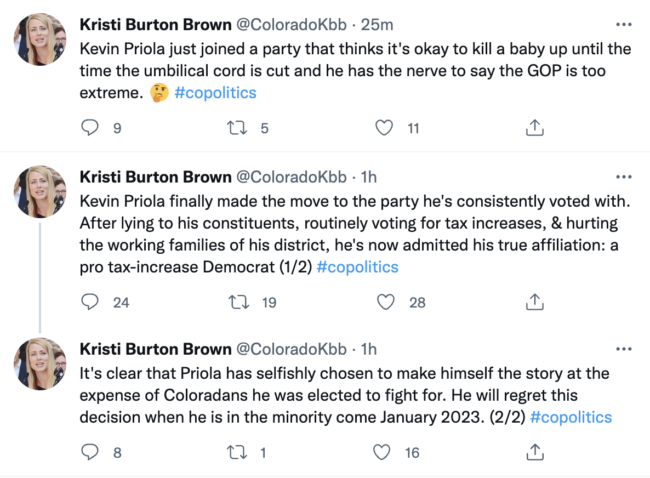 We took note of Priola’s precarious position within the Colorado Republican Party in a post last October as potential Congressional candidates in CO-08 were pondering their political future. The boundaries of the new CO-08 were almost an ideal setup for someone with Priola’s background, but the GOP refused to back their strongest likely candidate because he had the audacity to think for himself and focus on issues that he felt were truly important in Colorado:

This is why “soft red” Republicans like Kevin Priola, who have tried to carve out a niche in the Republican coalition counter to the party’s prevalent political trends in recent years, are going to have so much trouble surviving in the electoral climate we expect in 2022. A candidate running on a platform that spites their traditional base is at an inherent disadvantage running against opponents who enjoy base support. As competitive as Republican strategists think Priola could be if he survived a GOP primary, the fact remains that Priola can’t win in this highly competitive district without the Republican base solidly behind him.

And that is not going to happen. Five years ago, maybe. But this isn’t the same Republican Party.

Surely we weren’t the only ones to warn Republicans at the time that their shunning of Priola could come back to bite them, but the vitriol continued. Right-wing Republican “strategist” Michael Fields was among those in the GOP who openly shat on Priola’s political ambitions:

Instead of backing a Republican candidate in CO-08 who is “pro-life” but otherwise relatively moderate, the Colorado GOP now has to worry about the extremist views of “Secession Barb” Kirkmeyer against Democrat Yadira Caraveo in a race that looks like it will be neck-and-neck into November.

Fields is among those Colorado Republicans who are now threatening a potential recall of Priola, which is a silly and empty threat given the GOP’s laughable recent attempts to “recall” every Democratic politician whose name they can (mostly) spell correctly. In fact, Republicans ALREADY TRIED RECALLING PRIOLA two years ago. As the right-wing “Colorado Citizen Press” scribbled in March 2020:

Priola supported several green energy mandates, voted for tax increases, and voiced support for government-funded heroin injection centers, to name few positions counter to the Republican platform. It’s easy to see why Republicans might be sick and tired of voting for a candidate who damages the brand with his left of center voting record. [Pols emphasis]

Republicans who are sick and tired of being in the minority should be feeling queasy today. On Sunday, Republicans needed to win three Senate seats to control the upper chamber in 2023, which was going to be a tough lift in a state that has been shifting further and further to the left since 2016. Now that Priola has switched parties, the GOP needs to capture four seats in November.

Colorado Republicans can whine about Priola and call him names, but the reality is that it was their own actions that forced him to imagine a different political future for himself. If you spend enough time telling someone how much you dislike them, eventually they are going to start to listen.